The Ghost of Glenville State 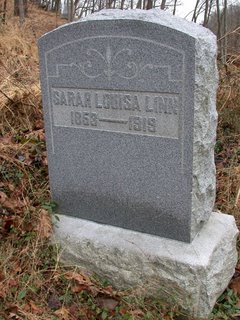 Sarah Louise Linn, otherwise known as "Sis," was born in Gilmer County in 1853.  Living in the Glenville area, she attended what was then known as the Glenville Normal School, an institution that would become Glenville State University...and was designed to train teachers.

Sarah graduated in 1877 and spent several years teaching school around the county and elsewhere.  At the age of 52, Sarah began what was to be a very short marriage.  In June of 1905, she became the wife of I.L. Chrisman, and put her teaching career aside, as married women did not teach in those days.  According to court documents, Chrisman apparently left Sarah after only six months of marriage, but it wasn't until 1909 that she formally sought the court to dissolve the marriage, and resume her former last name.

Not much is known about Sarah in her remaining years.  Some believe she ran a boarding house for female students out of her residence, which once stood where the former Verona Maple Hall stood.  Others believe she made her fortune in wine-making.  All is known is that by 1919, she had amassed a healthy estate.

In February of 1919, Sarah's life came to a tragic end.  She was found bludgeoned to death in her home.  The murderer was never caught, and no motive was ever really established, as very little, if any, valuables were reported missing.  Some believe there was a cover-up to protect involvement of a prominent local family, but that information in unconfirmed.  In any event, Sarah was buried in the adjoining cemetery.

Five years after Sarah's death, the college purchased the home, and tore it down to make room for Verona Maple Hall, a women's dormitory.  Before Verona Maple Hall was torn down in 1978, many of the residents had ghostly encounters that they attributed to "Sis Linn's" untimely demise.  When the building was torn down, activity seemed to transfer to Clark Hall, located adjacent to Verona Maple.  Many, many witnesses to the activity have come forth over the years to share their strange tales.  Other buildings on campus, including Louis Bennett Hall and Pickens Hall also have had their fair share of ghost stories, as well as the cemetery itself, where Sarah is buried, located right on campus.  It seems as if early visitors to the campus always find the gate open to the cemetery, even though it is shut tight, nightly.  Sarah has also been seen walking through the cemetery, possibly back to the location of her former home.

The school library houses a file containing court records, newspaper articles, and many more tidbits of information on Sis Linn's life and death, and of course the hauntings associated with such!

Vertical File Contents and Summary
Personal Experience from a retired professor
Posted by TheresaHPIR at 2:01:00 PM