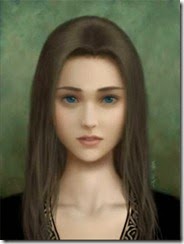 Welcome to Day 2 of Haunted/Cursed Paintings Week!  The next 'painting'  has been floating around the internet for years and has recently made a comeback.  According to popular legend, it was a self-portrait painted by a young Japanese girl named Sonee, who then scanned the image and uploaded onto the web.  She then committed suicide.

After it was posted to a Korean forum, many members of the site claimed that the picture had eerie powers.  Some said that if you stared into the piercing blue eyes of the subject for more than five minutes, you too would go mad and commit suicide.  Others believed that if you stared at it long enough, the girl's ghost would appear and sometimes kill you, making it look like a suicide.  In another version of the tall tale, it is stated that the portrait changes as you gaze at it.  The melancholy young girl's mouth turns to an evil smirk, her brows furrow, and her eyes darken.  A dark mist then envelopes her petite frame.

This artwork is actually by a Thai artist named Robert Chang and is of his original character creation, Princess Ruu, created for a screenplay he was working on called Tellurian Sky.  According to Chang, Princess Ruu is the only heir to the throne and is forced into a position of power at an early age, doomed never to have the chance of being with her true love.  This portrait, which was actually created using a computer program called Corel Painter, is supposed to be her last casual portrait before taking power.

*For another spooky Japanese Urban Legend, check out my blog on the Cursed Kleenex Commercial!*
Posted by TheresaHPIR at 4:24:00 AM