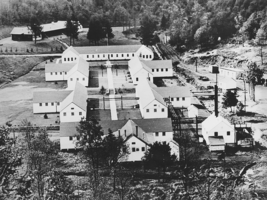 It's really easy for me to get distracted!  I started this blog post off with the intention of a simple piece on the most likely places in West Virginia to spot a Bigfoot, but then I fell in love with the history of the Mill Point Federal Prison Camp and one thing led to another....

Although all that remains today are some stone foundations and steps and a handful of historical signs, the Mill Point Federal Prison Camp in Pocahontas County, WV was once a thriving minimum security federal prison complex built at the edge of the Cranberry Wilderness.  It opened in 1938 and lasted until 1959, housing a large variety of low-level offenders, including moonshiners and WWII conscientious objectors.  One such famous prisoner was novelist Howard Fast, who wrote his acclaimed book, Spartacus while serving a brief sentence for refusing to testify against friends to the House Un-American Activities Committee in 1950.

The camp was a work camp; men worked in a variety of industries including logging, masonry, and the building of Route 39 between Marlinton and Richwood.  Since so many of the 'conscientious objectors' and similar prisoners were college-educated, they worked with the illiterate inmates in the prison's education system, which also offered vocational skills to help them adjust to life outside the prison.

Surprisingly, there were relatively few escape attempts at Mill Point.  The prison was not guarded by barb-wire fencing and heavily armed guards. Rather, the only thing that kept the inmates locked away were a series of white posts around the perimeter of the complex, connected with a cable that could easily be stepped over.  20 individuals dared to step over that cable and escape into the surrounding Cranberry Wilderness.  Most were caught easily as they stumbled out of the woods, tired, hungry, lost, and eaten alive by insects, turning themselves in.

However, since the late 1930s there have been little-discussed rumors about the real reason behind so few escape attempts.  It is said that since the camp's earliest days as a tent city housing inmate work crews working on Route 39, the woods surrounding Mill Point were known as "The Haunted Woods."  But, it wasn't ghosts or goblins that were stalking the wilderness.  Inmates were kept in check by the screaming of what many believe to be Bigfoot!  Many believe that prisoners refused to take advantage of easily accessible means of escape because they feared what awaited them in the woods surrounding the prison.

After the prison shut down in 1959, the buildings were torn down and nature has largely taken back the area. That hasn't stopped the rumors about the Bigfoot, though.  The Bigfoot Field Researchers Organization has compiled seven separate reports of Bigfoot encounters in Pocahontas County since 1969.  In April of 2005, the area was the site of an authorized expedition by the organization, and a second investigation was conducted in October of 2006. An actual sighting of a Bigfoot creature, strange stick formations, and other data led researchers to the conclusion that Pocahontas County is still a hotbed of Bigfoot activity.

If you'd like to visit the area of the Mill Point Federal Prison and possibly spot a Bigfoot, there are hiking trails in the area.  You can access the trail that leads to the old prison site by going about a half-mile from the Cranberry Mountain Nature Center.