The Suicide Stain at History Day 2013

Once again, HPIR was present at History Day at the State Capitol, promoting our Haunted and Historic Ghost Tours and chatting up the many politicians and other local historical groups throughout our great state.  This year, we also got an opportunity for a really interesting photo op... 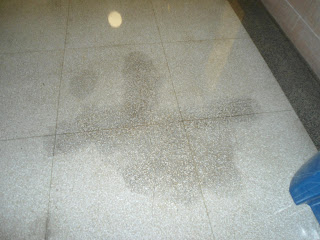 This photo can be found in the West Wing of the main capitol building, very close to Room W201, which happens to be the office of state attorney, Patrick Morrissey.  The stain, affecting at least six pieces of the expensive terrazzo tile is oddly human shaped when looked at from the right angle.  A head, along with two arms, and a lower body curled into the fetal position can easily be made out from the image, which is slightly raised.  On a facetious level, I think the stain, when viewed at this angle, looks like the little stick man found on wet floor signs took a nasty spill!

Anyway, according to a tip I received on my blog about the Haunted History of the WV State Capitol, it is believed that this stain is the result of a suicide that took place in the building when a state employee was found to be embezzling state funds, possibly during the 1930s.  This tip came straight from an anonymous capitol employee, so of course, I was intrigued!  Unfortunately, intrigue has only taken me so far in solving this mystery.

I have heard rumors of deaths at the state capitol, including at least one suicide, but verifiable information is hard to come by.  We do know that other reported ghost sightings have included a former maintenance worker, a lady in red, and a shadowy, human figure seen in an office near the Senate side of the second floor.  Without yet taking the time to systematically go through all the death records available for Kanawha County since the West Wing was constructed in 1924-5 to find someone who may be listed as dying at the capitol, I don't have a lot to report.  However, I was able to uncover some information about State Auditor John C. Bond.  Bond, who was born in Pendleton County in 1880 became the state auditor in 1920, and again in 1924.  In 1926, he was accused of embezzling funds from the state by way of writing checks to friends, family, and even people who didn't exist.  His employees would cash these checks for him, and Bond would pocket the money.  In 1927 he did officially resign, but would brought up on embezzlement and forgery charges shortly after.  While awaiting trial, it is said Bond had to be committed to Huntington State Hospital.  He was later found guilty and sentenced to six years at Moundsville State Penitentiary.  He didn't off himself though---he died in a Charleston hospital in 1943.  Obviously, that rules him out as the suicide victim, but I can't help but wonder maybe if one of his employees who was assisting him in these illegal activities might be our suspect?

The stain and the mystery behind it were definitely the highlights of the trip, but I was also able to get a photo of my uncle Paul's name engraved on the war monument, which honors those who died serving their country.  If you read Theresa's Haunted History, this is the same Paul discussed in Paul's Story, who disappeared on Normandy only to leave a puzzling mystery back here at home. 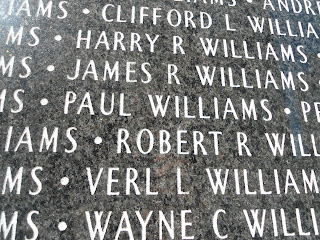