Its Friday, which means its time for another edition of Theresa's Haunted History's Friday Night Funnies!  If you are friends with or fans of ANY paranormal investigation team or interest group on Facebook, I'm betting you've seen a version of today's photo, laughed, and wondered...what's up with that? 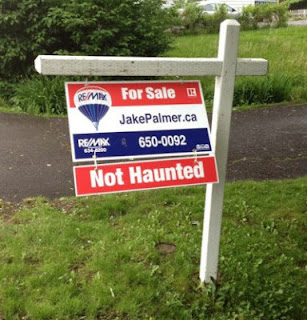 This photo, which has gone viral in the paranormal community, is actually an ingenious marketing ploy by Jake Palmer, a ReMax agent from New Brunswick, Canada.

In the real estate business, the section of the sign that states "not haunted" is called a "rider," and usually gives such information as "Open House" or "Reduced Price."  However, when a three-bedroom brick home in St. John, New Brunswick wasn't selling as fast as the owners would like, Palmer got creative in an effort to make THIS listing stand out among others.

At first, the rider proudly announced that the home was equipped with "Indoor Plumbing."  This humorous rider was such a hit, that after discussing it with the homeowners, a new "Not Haunted" sign was put up.

Jake Palmer had this to say about the signs:  "When a house has been on the market for a while you've already told everyone every feature the house has so you start highlighting some of them people might not typically think of."

Personally, I would be seeking out the signs with "Haunted," but that's just me!

*Looking for more laughs?  Check out the Top 10 Paranormal Facts-Chuck Norris edition!*
Posted by TheresaHPIR at 7:00:00 AM