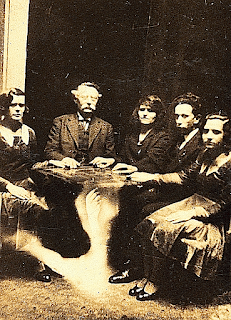 While doing research at the library, I found this article in a March 29, 1911 edition of the Huntington Advertiser.  It's not REALLY paranormal, but shows that the influence of the Spiritualism movement was still alive and well into the 20th century!  It also shows that charlatans have been preying on the vulnerable for years, using grief and faux messages from deceased love ones.

Washington, March 29---Spooks with a penchant for high finance have made Mrs. Laura Cramer, a government employee, the defendant in a suit instituted by the son of Fenton J. Hurd, a wealthy octogenarian to whom she claims to have been betrothed and from whom she received $36,000.

The son asserts that spooks wrote letters to his father advising him to "take good care of Mrs. Cramer and give her money."  He is now trying to get the money back.

Mrs. Cramer admits having indicted a few bright thoughts from over the Styx to her aged lover, but says she did so because he "was just crazy to get some message from his dead wife."  She declares Hurd gave her the money "just because he loved her."

I found a follow-up to this story in a May 5, 1913 newspaper called the Reading Eagle.  Basically, it states that Mrs. Laura Cramer milked this elderly gentleman out of a sum closer to $40,000...and was being forced to return it to his estate.  Mr. Hurd was a Connecticut millionaire, but had been declared incompetent by the state of Connecticut.  Originally, Mrs. Cramer had been awarded the money, but Hurd's son had appealed, and a higher court demanded the money returned.

The message to take away from today's post:  If the spirits are telling you to give exorbitant sums of money to your MUCH younger lover...you better make sure they actually are from the other side!
Posted by TheresaHPIR at 3:06:00 AM