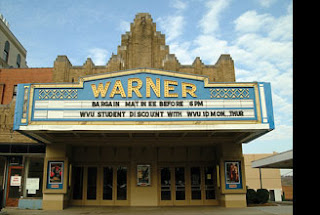 Today, Morgantown's historic Warner Theater is closed for business, and facing an uncertain future.  This is a far cry from the grand days of the theater's early days at 147 High Street.

The Warner Theater was built on the site of the former residence of prominent local physician Dr. David Hall Courtney and his wife, Lizzie.  Dr. Hall had passed away on May 27, 1929 at this location, due to "generalized arteriosclerosis."   In any event, the house was razed, and the property purchased by the Warner Brothers of film fame who hired architect John Eberson to design a grand theater.  The theater officially opened on June 12, 1931 at a cost of $400,000 and was of a classic art deco style.

The first movie that was shown at The Warner was The Millionaire, run by projectionist Constant (Con) DeFere.  Con, who was originally from Belgium and trained in glassworks, quickly found a penchant for film, and helped to actually install the sound and projection equipment in the new Warner Theater.  Con died in December of 1975 and spent much of his life, at LEAST until 1958 (as seen in a local newspaper article), as projectionist for the theater.

In the 1970s, the single screen theater was partitioned out into a tri-plex; the bottom floor was divided into two, with two separate screens.  The balcony became the third auditorium, and was serviced by the original projection booth.  It is this area of the theater that is said to haunted.  Unfortunately, that's about the extent of the information I have on the haunting.  Several websites mention that the balcony is haunted, including one site which includes an informal interview with a former manager of the theater, who stated that many believe that its haunted, but that its probably not.  Other websites claim that an apparition has been seen here and that there are rumors that a body was found in the theater years ago.

If the theater IS haunted, my guess, based solely on what little research I have been able to uncover online, is that there are at least two good suspects.  The first suspect is obviously Dr. Courtney or a member of the Courtney family who lived and died on the land before the theater was even thought of.  The second is Con DeFere, who devoted his life to a somewhat dangerous profession, spending much of his career at the Warner Theater.  Since the haunted area is said to be the balcony area, which holds the original projection booth, this theory makes sense to me.

Another sort of interesting fact that may or may not contribute to a haunting is the construction of the building itself.  In order to maximize acoustics, the walls were plastered with an "absorptive plaster."  This material is filled with tiny holes and is meant to reduce echo and reverberation.  It is said to contain such natural ingredients that its actually edible!  We've all heard the hypotheses that limestone and other materials can "trap" and replay spirit energy...could this edible plaster with its tiny holes actually be trapping and storing energy as well?

Unfortunately, we may not ever get the chance to fully study this location, as it shut down in September 2010.  It had been purchased in 2004 by the Round Table Corporation, who was intent on saving and restoring the theater, while at the same time offering a mix of indie/cult films and newer showings at reduced prices.  Too much competition from bigger area theaters combined with the money and headaches of keeping up an aging structure proved too much, however.  There were issues with the sound and projection equipment (especially in the balcony), the heating and cooling systems, and even the curtains over the screens.  In an ironic twist of fate, the final film shown that last day of operation was Dinner For Schmucks...a far cry from The Millionaire, a film shown when the Warner was truly THE place to be in Morgantown society.

*Don Knotts worked at the theater while in college at WVU.  In 1964, the Warner hosted the national premiere of Don Knotts' film, The Incredible Mr. Limpet.

*The Warner Theater is located adjacent to the (haunted?) Clarion Hotel Morgan.

*The front of the theater still houses several businesses, including a hot dog restaurant.

*The original ticket price for a daytime showing was 15 cents.

Please see THIS ARTICLE for more information, stories, and recollections!

THIS ARTICLE talks about the hauntings on the balcony