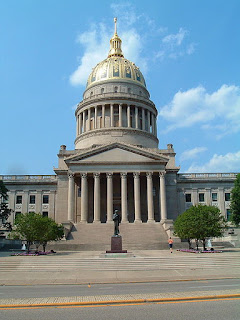 West Virginia can easily claim to be the state with the most capitals and capitol buildings; since becoming a state in 1863, our state capital has switched between Wheeling and Charleston, suffering several devastating fires, before finally finding a permanent home  located in the East End of Charleston.

The current WV capitol building was designed by architect Cass Gilbert and was officially dedicated by Governor William Conley on June 20, 1932.  The massive gold-domed, limestone structure is said to have no less than two ghostly apparitions to walk its marble halls.  One of these is a woman, while the other is said to be a maintenance man who died of a heart attack while on duty.

A second theory is that these two specters are the apparitions of two people who perished in the 1921 capitol fire.  This theory, discussed in James Foster Robinson's book, doesn't make much sense.  To begin with, the two people who perished in the 1921 fire were both men, both suffering life-threatening injuries from the roof collapse.  Secondly, the capitol that burned to the ground in 1921 was NOT located on the present capitol grounds.  The 1921 capitol was located on Capitol Street, in what is the heart of downtown Charleston.

If you're in the Charleston area, stop by to see government in action, and take a tour of our architecturally unique capitol complex.  Keep an eye out for maintence personnel, however....they may not be who they seem!

UPDATE:  February 2012-Once again, HPIR was onsite at the capitol for History Day at the Legislature, promoting the Haunted and Historic Guyandotte Tours!  We were fortunate enough to have gotten a first hand account of the specter that roams the halls of the massive building.  A member of the janitorial staff with 15 years experience had his OWN ghostly experience one morning.  Early one morning he was tidying up an office, located on the second floor House of Delegates Finance Hall.  This was normal routine; his staff would come in during the wee hours of the morning before the delegates, or anyone else for that matter, was due in the building.  On this particular morning, he saw a figure of a person walk by the glass door of the office that was being cleaned.  Knowing that no one should be in that section of the building at that time, our source immediately went to investigate, but found no one in the area.

Before leaving the capitol, HPIR went to inspect this hallway, and indeed found where the sighting was said to have occured.  We believe that it is possible that the employee we spoke with may have seen our phantom maintenance man as he passed by a certain office (name withheld) on his way to the "electric shaft" closet.

UPDATE: February 2013-Another History Day is behind us and we used the opportunity to explore the mystery of the Suicide Stain, discussed below in the comments!  You can find out more about this unique mystery HERE! 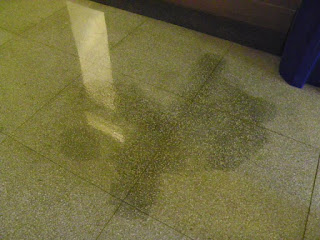 Links of Interest:
Lots of historical photos from the 1921 fire and "pasteboard capitol."
Capitol Facts
Posted by TheresaHPIR at 1:06:00 PM