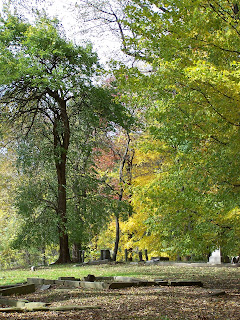 The Kelly cemetery, located off County Road 141 and visible from Highway 52, was an early training ground of HPIR investigators.  The cemetery first gained our attention with several photos submitted by a local that seemed to contain "super-charged orbs," sometimes referred to as plasma lights.  These plasma lights did not have the typical pattern and substance that you see in the classic examples caused by motion blur and/or slow shutter speed, so we decided to try to recreate them on location.

Our first investigation of the cemetery led to no substantial evidence of a haunting, nor could we fully debunk the submitted photo.  I personally love the cemetery for its unique history.  Established on 22 June 1851, the Kelly Cemetery was the town's main cemetery up until the early 1870s, when nearby Woodland Cemetery opened.  It was established by William D. Kelly, a prominent businessman in the area.  His marble monument, which once stood at 20 feet hight, was erected in 1855 at a cost of $1,200.  Kelly himself wasn't actually buried there until October 2nd, 1891, when he passed away at his home on the hill.  This home, which is now the present site of a subdivision, was later converted into the Deaconess Hospital.

The cemetery contains the graves of several prominent early Ironton citizens and their families, including that of J. Allen Richey, the first Secretary of the Ohio Iron and Coal Company, who passed away in 1855.

A second investigation of Kelly Cemetery also did not produce any physical evidence, but 3 out of 5 investigators present had personal experiences, including the feelings of being touched, of being slapped on the leg, and of seeing an orb-shaped ball of energy in the surrounding woods with the naked eye.

For the most part, vandals and neglect have taken their toll on the cemetery.  Even as early as the 1890s, it was being reported that the area was being neglected.  Many of the stones are broken or missing entirely and weeds and overgrowth have been an issue.  However, from what I've heard, the cemetery is being better taken care of!  Inmate work crews have cleared away a lot of the brush and weeds, and the Lawrence County Historical Society, which keeps great information on the cemetery, is always willing to chat with you on what they know of the prestigious Kelly family.

Theresa's Side Note:  When doing initial research on this cemetery, fellow investigator, Danny, and myself headed over to the Lawrence County Historical Society.  This trip was a lot of fun!  After giving us a tour of the facility, and telling us about the Kelly family, the lady volunteering that day told us we should also check out what she claimed was a second Kelly family cemetery, located just a few miles away from the first.  I'm not familiar with Ohio roads, so I cannot recall the exact location...but I do remember driving out this country road and coming to a dead end.  Thinking we'd taken the wrong road, we turned around at the mouth of the farm property and headed back toward Rt. 52.  On the side of the road, we saw what looked like a 4-wheeler trail, so we stopped to check it out...and found the cemetery hidden among the waist-high grass!

We followed a "path" of sorts that wound around the scattered graves, and as we were checking them out, both Danny and I seemed to catch a glimpse of something watching us through the weeds, further on up the hill.  This "thing" was big, taller than an average man, but it was entirely white.  We heard movement and watched the grass move as it darted up and out of sight, sensing we had seen it. The entire time we were there, I had the feeling that whatever it was, it was still there, watching us.  We never did find out exactly what we saw that day, but do know that unless it was an albino, bi-pedal deer, we may never know!  I know the more likely scenario is that we stumbled upon, uh, personal property...and that we had an irate grower, er, I mean owner, watching to make sure we didn't do anything.  BUT...that area is known for Bigfoot sightings, so that's always fun to think about!

Photo above copyrighted by Melissa Stanley, HPIR Founder and President