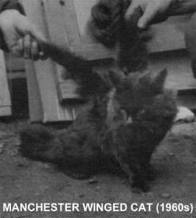 It sounds like something out of a fairy tale or a little girl's dreams:  a cat with wings, flying merrily about and having enchanted adventures in far away lands.  (To others, it may sound more like a nightmare, hehe)  But either way, a winged cat cannot possibly exist in nature, right?  Well, not exactly....

Although there is no such thing as a flying cat, nature has produced us several examples of cats, who it appeared, had wings.  There are actually three different scenarios that produce these winged cats, and as a result, winged cats have been reported all over the globe and throughout recorded history.  The first scenario is the most common, and that is, the wings are simply matted fur.  The matted fur explanation is most often seen in long-haired cat varieties as fur tends to become matted, and even starts to become "felted," resulting in what looks like wings that flap when the cat runs or walks.  This is also not uncommon for shorter-haired breeds, as they shed their winter coats in mid to late spring.  However, it might be more alarming to novice cat owners and mistaken as wings.  In any event, these clumps of matted fur are uncomfortable to the cat, and can harbor dirt, feces, and parasites, so they should be clipped off by a veterinarian.

The second explanation for the winged cat phenomena is a skin condition called Feline Cutaneous Asthenia (FCA), in which the wings are actually extra flaps of skin found on the cat's shoulders, haunches, or back.  What is really quite interesting with FCA is that many cats with this condition can actually move these flaps at will, showing that the wings do have muscular tissue and tendons.  Obviously, you would NOT want to cut these wings off.

Lastly, and the most rare of the conditions, is simply, extra appendages.  We've all seen the photos of the calf, and the sheep, and the chicken with extra legs and the same applies to these cats.  These extra appendages are usually fur covered, and at times, can be controlled by the animal, giving them the appearance of flapping wings.

West Virginia is lucky enough to have its own winged-cat celebrity, a white Persian named "Thomas."

In May of 1959, 15 year old Douglas Shelton of Pineville (Wyoming County) was out in the woods when his dog treed something.  The boy looked, and saw it was a cat, so he climbed the tree and brought it home.  However, Shelton would quickly see that this was not an ordinary cat--it had two wing-like appendages coming off its back!  As word spread of his unique discovery, Shelton began charging a dime for visitors to take a look at his new pet who he christened "Thomas."

A reporter for a Beckley newspaper, Fern Miniacs, came and examined the cat, which she discovered was actually a female.  It also appeared to be a Persian cat who she concluded, had wings that had no bones, but definitely gristle.  The wings were soft and fluffy towards the ends and slightly gritty towards the body.  An anonymous out-of-state veterinarian also concluded that the wings were of unknown origin, but a local conservation officer maintained the opinion that the cat was simply shedding its coat.  His opinion was largely ignored by the growing number of Thomas fans.

Thomas' popularity grew so much that she even landed a spot on the Today Show.  Thomas and Douglas Shelton took the train into New York, and appeared on the show live on June 8, 1959.  However, the show would have negative consequences.  Watching that day was another Pineville local, Mrs. Charles Hicks.  Hicks claimed that the cat was HERS, and that her name was Mitzi.  Mitzi had run away as a result of being given some ear drops, four days before Shelton found her.  Hicks claimed that Mitzi was a gift that had been purchased by a friend in California.  Friends and family had all seen her wings, and could verify that she was indeed property of Mrs. Hicks.  She demanded the cat be returned, but Douglas Shelton refused.  As a result, Mrs. Hicks took the matter to court.

The case was tried on October 5, 1959 and everyone in the courtroom was shocked to see Douglas Shelton carry in a wingless cat, and a shoebox containing two clumps of matted fur.  Shelton admitted that Thomas had shed her wings back in July.  Mrs. Hicks nastily replied that the cat in question was NOT her Mitzi.  She was rewarded $1 in damages, and the Shelton family was awarded full custody of Thomas, the now wingless cat.

But that's not where the weirdness ends, folks....

In 1966, the famous Fortean researcher John Keel was traveling through southern West Virginia and attempted to locate the formerly famous Thomas and her owners.  Although unsuccessful in tracking them down, Keel was in West Virginia, as opposed to his home base in New York, when he received word that a carload of kids in Pt. Pleasant, West Virginia had been terrorized by a large man-like flying beast with glowing red eyes.  Because he was so close, Keel was one of the first Fortean researchers to arrive on-scene in the sleepy little Mason County town, and thus, began his long journey with the Mothman phenomena.

*The photo above is NOT of Thomas, since I can't find a really good one online or in print to scan in.  If you know of a photo of Thomas and have permission to use it, please let me know.  Thanks!*