The Pink Pachyderm of Barboursville 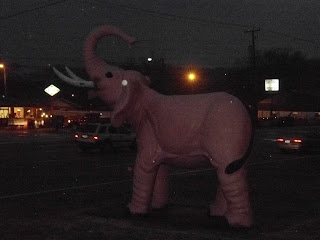 Welcome to 2013 everyone!  It's been a wild ride, but we made it through another year at Theresa's Haunted History.  After the celebrations of the holiday season, I thought today's post would be a perfect way to start the new year.  Pink elephants.  If you've seen one, you might have partied a little too hearty over New Year's.  Or...you live in the tri-state area and have driven past Barboursville's most iconic art piece, wondering just what in the heck is the deal with it?

The Pink Elephant of Barboursville has many legends surrounding its existence.  A legendary tall tale allegedly passed around city hall is that President Ronald Reagan purchased the beast at a Washington, D.C. area flea market.  After sneaking it back under the cover of darkeness, it made its home on the White House lawns until it showed up on eBay during the Clinton administration, and bid upon by an anonymous West Virginia buyer. I remember the elephant being there WAY before the Clinton administration, as do most citizens, so I'm guessing this tale is a silly story told to newbies to the area.

Another, more believeable, tale has the elephant simply being a present (or memorial) to a little girl from her grandparents.  This theory is evidenced by the fact that in the concrete holding the massive giant in place there are a pair of tiny footprints and the name "Nikki."

In reality, the Pink Elephant of Barboursville is simply a marketing device.  It was probably constructed and sold by the company "Sculptured Advertising," based in Sparta, WI who installed its first pink elephant in 1963 at an Iowa restaurant called the Pink Elephant Supper Club.  Similar pink elephants can be found throughout the United States, most notably at a Tennesse car dealership and a mini golf course in NY.

Our elephant was purchased in Michigan by local businessman David L. Taylor and installed in front of his gift shop in the summer of 1970.  The 15-20ft. fiberglass pachyderm had the facetious additional advantage of helping the local drunks find their way home...but probably also giving some psychedelic drug users quite the scare over the years, as well!

David Taylor's wife, Hazel, has stated that the elephant immediately became a success upon its installation, and a community icon.  It was said that David loved the publicity of the elephant, and before his death in 1986, would decorate the statue seasonally, even celebrating the Christmas holidays by donning a Santa suit, climbing aboard the pink pachyderm, and waving to the children.

After David's death, Taylor Gift Shop was rented out to other businesses, and Hazel toyed with the idea of moving the imposing statue to her backyard and painting it gray.  The public rallied against the move, and even the business housed in the Taylor Building threatened to move out if the elephant wasn't part of the deal.  Since that time, the elephant's popularity and mystique has continued to grow.

Many local citizens use the elephant as a landmark when giving directions.  Republican groups have flocked from all over to have their photo taken with the statue.  In 2005, when the elephant was vandalized by college kids who thought it looked better painted Marshall green, the community fought for it to be returned to its pink color.

Today, the Taylor Building houses the L.L. Roe Insurance Agency, and the elephant is still there, front and center, with a fresh coat of pink paint.  But who is the Nikki mentioned above?  That, I'm not sure about.  I thought that researching David Taylor's obituary, I'd find the answer...that Nikki was simply the Taylors' grand-daughter.  Unfortunately, the obituary only lists two daughters, Tootie St. Clair of Atlanta and Susan Sheets of Barboursville.  It's possible that Nikki is the daughter of one of these ladies, but I haven't found her yet...Nikki, are you out there????

Update June 2013:  About a month or so ago, we took my three year old son, Luke, to the Barboursville Dollar Tree, taking Route 60 from Hurricane.  I hadn't realized it, but we had NEVER driven him past the pink elephant!  He noticed it immediately and started yelling from the backseat, "Mom, mom!  Me see PINK elephant!  Did you see it?  See it, Mom??"  I am so happy that he is now experiencing the same excitement and wonder that I, and many others, have experienced!

Update July 2015:  I found Nicole (Nikki) and she's written an article about this iconic piece of Cabell County History! You Are Here Stories
Posted by TheresaHPIR at 3:35:00 AM