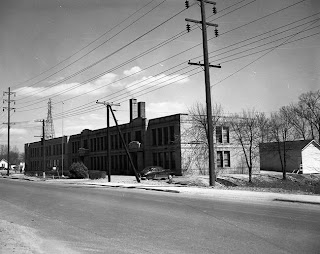 For the past several years, the Chesapeake Community Center has caused quite a lot of buzz in the local paranormal community.  With the help of Quest Paranormal out of Ironton, the former school has been the subject of television appearances, newspaper articles, and regular ghost hunts open to the public.  And to those who have visited the building, their personal experiences and other examples of paranormal evidence have definitely justified the hype!

Prior to 1921, there was no actual high school in the town of Chesapeake.  So while grades 1-8 were housed in several small 1-2 room schools, including a 2 room building on Rockwood Avenue, upper grades were sent elsewhere, including Central Jr. High School in Huntington, WV.  That Fall, nine Chesapeake resident students attending Central were sent home due to overcrowding.  As a result, the parents of the community met with the local Board of Education and demanded a solution.

A temporary compromise was reached.  For the 1921-22 school year, the school board rented out a large room on the second floor of the Fraternal Hall Building.  In addition to lodge meetings, church services, and the operation of a grocery store, the building now was home to 28 freshmen and sophomores from Chesapeake.  These students included the original nine students from Central Jr. High, as well as sophomores who had spent THEIR freshman term the year prior at Proctorville High School.  Presiding over the group was only one teacher, Mr. Willard McDaniel.

The following year, classes were moved to the first floor of the Fraternal Hall Building, where the "school" then occupied TWO rooms with added equipment and a second teacher, Mr. John Dillon.  In 1923 the high school moved out of the Fraternal Hall Building when it "switched places" with the upper elementary school students while arrangements were made for a more permanent solution.

That solution came in the form of the new high school building.  Construction started in 1924, and by the fall of 1925 the new Chesapeak East School was ready for enrollment.  This new building is the one that today, houses the Chesapeake Community Center.

During the 1948-49 session, a large addition was made to the school.  When school started back in the fall of 1949, grades 1-8 moved into this new edition, eliminating the need of at least two of the local, outdated 1-2 room school houses.  This set-up lasted until 1956 when a new high school was built.  The upper grades of Chesapeake East moved into this new high school, leaving the building entirely for the elementary grades.  This move left the school district with three schools:  1. The new high school 2. Chesapeake West Elementary, and now, 3. Chesapeake East Elementary.

With such a history, this school, like so many others, quickly obtained a reputation of being haunted, but these tales have only just recently really begun to make themselves public.  The current director of the facility relates that one of the first sightings came from a Marshall University student who was using the gym.  This young man claimed to see a little girl in a blue dress with long, blonde hair.  Shortly after that, a little girl who was visiting the facility with her father reported seeing the image of the same little girl in a mirror.

This little girl is one of the most sighted apparitions to walk the halls of the Chesapeake Community Center, and many believe she was a former student of the school.  Some who have seen her describe her as being around 12 years old with her long blonde hair done in curls.  One legend as to this little ghost girl's existence states that the girl WAS a student at the school who was made to commit suicide with her grandmother by jumping off the nearby Symmes Creek Bridge.  This story allegedly comes from the turn-of-the-century, before the school was built, so its possible the girl wandered in, attracted to the energy of years of students crammed into the building...or perhaps originally went to one of the little school houses located very near the East School.

Whatever her story may be, the little girl isn't the ONLY ghostly manifestation in the building.  Others have seen or sensed the presence of an adult male, and some believe he was a former janitor...because just about every "haunted school" has a tale about a ghostly janitor, lol.  But what is most un-nerving is the presence of something much more sinister.

With an influx of people visiting the building for the purpose of paranormal research, a previous "un-reported" entity has overshadowed all the rest.  The basement area is the women's locker room.  Countless investigators and visitors have reported that something in that room has been known to leave a nasty set of scratch marks on unsuspecting persons' flesh.  The reason for or identity of this suspected entity is simply speculation at this point, and history becomes slightly muddled.

Other sources have reported that this building IS the Fraternal Hall Building, and that it was built by a local chapter of the Ku Klux Klan.  There is also a rumor of a tunnel running under Route 7 and it is believed that slaves were held in the basement area.  While a mixture of KKK and slavery certainly does seem like a textbook explanation for such an angry, hostile manifestation, I haven't personally been able to verify these stories.  The building that is there now is definitely NOT the old Fraternal Hall Building.  It was built in 1924 for the purpose of a school.

However, I haven't been able to locate where this Fraternal Hall actually sat and until more information becomes available, I guess it IS possible that the foundation of the school actually sits atop a former building, perhaps even the Fraternal Hall, although I'm not sold on it yet.  If that building, or any building that sat on that property was built prior to the Civil War, its also possible that slaves could have sought refuge there.  Ohio was a free state, and there is plenty of literature out there about Lawrence County's involvement with the Underground Railroad.

Whatever the history may turn out to be, the building is still widely considered as haunted, and public ghost hunting is allowed so you can experience for yourself (for a nominal fee) the many ghosts of these former hallowed halls. 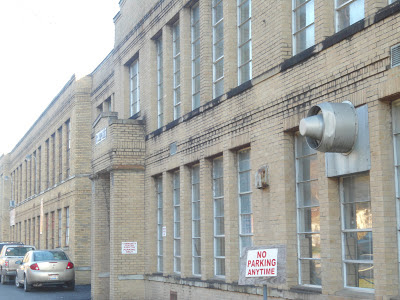 *Information for this blog post came from a variety of sourches including:
The Lawrence Register
The Ironton Tribune
History of Lawrence County (1990)

*Historic Photo from the Herald-Dispatch.  Present-Day photo from Theresa.*
Posted by TheresaHPIR at 7:24:00 AM