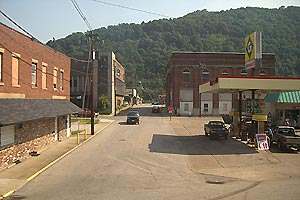 Today, the former Montgomery City Hall (Fayette County) is torn down and in its place sits a Go-Mart gas station.  However, before this pre-WWI structure met with the wrecking ball, it was rumored to be haunted.

In the late 1970s, the former brick building was used to house both the fire department and the police department along with the town's government offices.  While on duty one evening, two  officers shared an experience that just isn't covered in police academy!  Working the midnight shift, the two men heard footsteps walking across the wooden floorboards of the floor above them.  They distinctly heard the footsteps walk into the kitchen area of that floor, where the footsteps paused.  The men then heard the unmistakable sounds of water running in the kitchen sink, and rushing down the pipes past their floor.  The water turned off, and the footsteps once again were heard, walking back to the other side of the room.

These fairly normal sounds wouldn't necessarily cause a disturbance...however, the two officers knew they were alone in the building.  One officer, who had been with the force the longest, instantly recognized the sounds.  They were the nightly ritual of the former Fireman-in-Charge of the midnight shift, who suffering from indigestion, would have to take a nightly pill, and would walk into the kitchen for a glass of water to wash it down.  The only problem was that the Chief died ten years earlier, and the midnight shift for the fire department was disbanded.

Whether from the power of suggestion, or the  security of knowing that they weren't crazy, other officers working on the night shift reported hearing the phantom sounds of the former Chief.  One such officer attempted to get to the bottom of these manifestations one night.  He personally cleared the offices, making sure no one was up there.  He then inspected the sink, shutting off both faucets,  wiping the sink out,and  then lining the sink with paper towels.  He then locked up, and waited for the ghost to appear.

The officer was not disappointed.  Around three that morning, the footsteps and sounds of running water once again filled the lower level, and the officer jumped up and ran up the stairs.  He found the door still locked, and when he opened it, no one was there.  However, the paper towels he left in the sink were soaking wet.

With the closure of this former building, some believe that perhaps the ghost of the former fire chief might have wandered over to WVU Tech to look after the college students living in one of the dorms.  The apprehension of experiencing an apparition of a fireman walking the darkened halls of your residence has surely influenced at least one student to NOT burn the popcorn!

*The majority of information for this article came from the Haunted West Virginia book by Walter Gavenda and Michael Shoemaker!*
Posted by TheresaHPIR at 6:22:00 AM