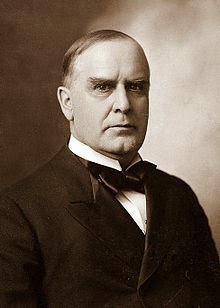 Shortly after the Civil War, the C&O Rail Road saw a need to build a line from Covington, Virginia, to the small, yet prosperous town of Guyandotte, WV. But, there were a few problems...

The terrain through much of West Virginia was rough and steep.  Although the line followed the river as closely as possible, a lack of bottom land still presented the need to blast the steep cliffs into usable roadbeds.  The blasting was met by opposition by the locals.  Despite the economic advantages of having a rail line, those in the New River region claimed to experience a sinister side of the process.  It is said that after the cliffs were blasted, people would see the silhouettes of loved ones and neighbors etched into the remaining rock.  To see such an image meant that the person was surely to die.

However, the line was continued and finished.  In September of 1901, however, the superstition returned with a vengeance.  Workers for the railroad were working on a four mile long spur line between Thurmond and Minden.  After blasting a section of rock to make a roadbed, the workers were horrified to see the silhouette of President McKinley.

Within an hour, the telegraph office in Thurmond brought the official news--President McKinley had been shot by Leon F. Czolgosz while attending the Pan American Expo in Buffalo, NY.  Within three days, the president had died.

That's not where the coincidences end, though.  There is a definite link to both President McKinley AND Czolgosz to the state of West Virginia.  Czolgosz was an immigrant who lived in Kanawha City, and worked in a wire factory there.  McKinley served as a quartermaster in the 23rd Ohio Regiment, and spent a great deal of time at both nearby Camp Haskell and Camp Tompkins.  In fact, McKinley probably passed by the area of his death omen on several occasions.

Today, the rail line between Thurmond and Minden is gone, but is replaced by the Thurmond-Minden Trail.  While traveling from Thurmond to Minden (never the opposite way), the faint image of McKinley can still be seen through the brush. To be honest, I don't see it. Let me know if you do in the comments below!