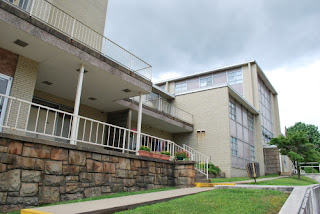 On the campus of WVU Tech sits Ratliff Hall, a coed dormitory.  This dormitory was constructed in 1963 and named for Dr. Lavada Ratliff, former head of the Education Department at the university.  The dorm, which consists of two separate wings, was meant to be a coed facility, but up until 2006, primarily served as housing for women only.  Today, the west wing is reserved for females, while the east houses men.

It is presumably the west wing that has picked up a reputation for being haunted, especially the second floor.  On this floor, numerous paranormal experiences are reported by female residents, including disembodied footsteps in the corridors, doors that slam on their own, and curtains that billow out without the aid of an open window or A/C.

Perhaps the most interesting experience reported from this second-floor ghost haven is the sighting of an actual apparition.  Due to a power failure, the lights in the dormitory temporarily flickered out.  While in the dark, one young lady saw what appeared to be the figure of a fire fighter in the hall.  This figure disappeared a moment later when the lights flickered back on.  Many believe that this firefighter has a connection to a small fire that took place on the second floor of the dorm in 2000, although no one was hurt or injured in this blaze.

However, it is interesting to note that very close to campus is where the former Montgomery City Hall and fire department was housed, which was also noted to be haunted by a phantom fireman.  Could it be that when this structure was torn down to make room for a gas station, the spirit of the fireman made his way into the dormitory?

Photo from the WVU Tech Housing Website
Posted by TheresaHPIR at 9:36:00 AM