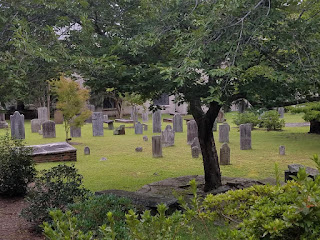 The temperature made a drastic drop this week here in West Virginia...and while I absolutely have no problem with it...it does make me a little nostalgic for summer vacation.  This year, my family visited Carolina Beach, North Carolina and spent quite a bit of time in nearby Wilmington.  On one of our excursions into town, we made a stop at the small, historic cemetery located behind St. James Episcopal Church.

You won't find a tombstone with his name on it, but records to indicate that a young man by the name of Samuel Joselyn was buried in this cemetery back in 1810.  Unfortunately, it doesn't appear that Samuel was actually DEAD at the time of his burial!

Samuel came from a wealthy family, which afforded him the opportunity for a good education and the leisure time to get together with young men of similar means and discuss philosophical and academic ideas.  One rainy evening, the discussion turned to the topic of the afterlife and the survival of the soul after death.  Samuel and his best friend, Alexander (Sandy) Hostler made a pact:  whoever died first would come back and contact the survivor.

The two young men probably weren't thinking much about that pact on July 4, 1809.  On that date, Samuel married Mary Ann Sampson of another wealthy Wilmington family, and settled down with the intent to open his own law practice in town.  Unfortunately, his marriage would be a short one. 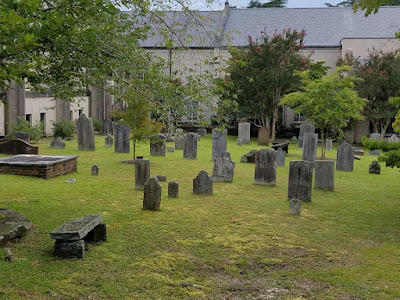 On March 16, 1810, The Jocelyn's and several other wealthy families were vacationing at one of their nearby hunting lodges. Mary Ann and Samuel apparently got into a fight that evening, and Samuel, in a rage, fled the hunting lodge wearing only a thin coat.  Due to the poor weather and Samuel's apparent poor state of mind, a search party went looking for them.  It wasn't until two days later that he was found in the swamp, lying in 4 inches of icy cold water.  He had apparently fallen or was thrown from his horse.

Family and friends were distraught as Samuel was laid to rest at St. James' graveyard soon afterward.  Sandy Hostler took the loss of his friend especially hard.  The grieving Sandy was horrified when on the night of Samuel's funeral, an apparition of the deceased young man appeared before him.  The apparition spoke, imploring Sandy to "dig up my body."  Sandy, shaken by the vision, assumed that the ghost was nothing more than a product of his grief and his sleeplessness.  And then, the apparition appeared twice more.  At a loss of what to do, Sandy sought the advice of Louis Toomer.  Louis reminded Sandy of the pact that Sandy and Samuel had made, which Sandy had completely forgotten about.

Louis further theorized that Samuel had somehow hidden in the coffin some sort of proof of life after death, and that's why he was so insistent that Sandy open his coffin. So, after much deliberation, the two young men decided that it had to be done.  They would exhume their friend's body themselves.

The night came and the two met just outside the graveyard's gates.  As they completed their grisly task, it finally became apparent that Samuel had not hidden any proof of the afterlife in his coffin.  It was much, much worse. 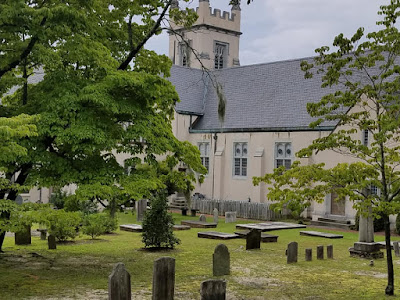 Samuel's ghost DID contact Sandy that first night, and on two subsequent nights, but it wasn't to share proof an afterlife.  It was an attempt to SAVE his life.  Samuel's face wore a twisted look of sheer terror.  His fingers had scratched the coffin lid until they were nothing but bloody stumps, bones exposed.  Samuel hadn't died in the swamp; he had died a horrifying death buried alive.  Perhaps by the time his apparition had come to Samuel, it had already been too late.  Or, perhaps what was his 'ghost' was actually his soul temporarily leaving his body in order to seek help.

Sandy is also long gone now, but Samuel's ghost is still scaring the residents of Wilmington.  Before the fence and the security cameras, locals would scare themselves by daring each other to lie atop of Samuel's grave, ear to the ground, for one hour.  Legend states that no one was ever able to last the entire time without fleeing.  Others refuse to even walk past the graveyard at night fearing they might hear the muffled cries of Samuel Jocelyn, reliving the horror of being buried alive.


*You can read more about Samuel Joselyn's story in the book, Ghosts of Old Wilmington, by John Hirchak!  The church is also one of the potential stops on the Ghost Walk of Old Wilmington Ghost Tour!*


Blog Bonus!
On Monday, I shared a blog post about songs based on real paranormal events and popular ghost stories.  One of my readers, the awesome Mr. Lewis O. Powell, IV who runs The Southern Spirit Guide, an awesome blog about ghostly goings-on in the Southern US, shared this song with me!  Sam Jocelyn's Ghost is a musical re-telling of the story by the ETSU Bluegrass Pride Band.  Definitely give it a listen!  (Here's the direct YouTube link in case the video below won't play.)