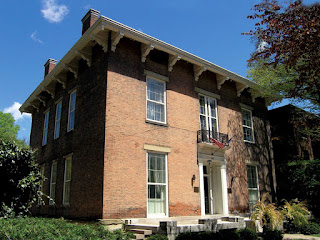 The Kelton House in Columbus, Ohio's historic Town Street District is a beautiful old Italianate home.  It was built around 1852 by pharmaceutical and dry goods wholesaler, Fernando Cortez Kelton and his wife, Sophia. The Keltons, who were staunch abolitionists, made their mansion into much more than a home. It was a refuge for both freed and fugitive slaves, serving as a stop on the Underground Railroad.

The Kelton House stayed in the family until the death of Fernando and Sophia's granddaughter, Grace Kelton, in 1975.  Grace was a renowned interior designer and preserved the history of her family home and much of its Victorian-era furnishings.  Upon her death, she willed the house to the Columbus Foundation for use in educational purposes. Today, the Kelton House is run by Columbus' Junior League, and operates as a museum.  It's a popular venue for school field trips as well as local weddings...and it would seem as if the Kelton family were still around, keeping watch over their property!

According to an article from Columbus Monthly website, dated 6 February 2014, quite a few ghosts have been heard, spotted and felt in the home.  Experiences began in 1976, immediately as the former residence was being renovated into a museum. It was not uncommon for workers to return to work in the morning and find that furniture they had moved the previous day had been moved back to its previous spot.  Tools and supplies would also move around on their own, or go missing altogether.  Once, the burglar alarm went off by itself.

It wouldn't be long before the ghosts of the Kelton family would actually start to show themselves.  One volunteer was locking up one night when she noticed a woman watching her from an upstairs window.  She later identified the mysterious woman from a portrait of Sophia Kelton.  Another volunteer may have also seen Mrs. Kelton; while speaking to a group of museum visitors, she noticed a woman slip into a room across the hall.  As this area was off-limits, she went to find the woman and ask her to leave.  However, there was no one in the room---only a feeling of peace throughout.

Sophia isn't the only ghost of the Kelton House.  Another volunteer ran into what she believed to be a tall gentleman in the hall.  She looked up to apologize to thin air.  Another male entity seen on the property is a man dressed as a Union soldier.  He is believed to be Oscar Kelton, who died in battle during the Civil War.  A child ghost dressed in Victorian-era clothing rounds out the bevy of apparitions one can witness while visiting the Kelton House today, and your normal ghostly activity such as unexplained footsteps, whispering, and other sounds is ever-present.

It would definitely seem as if the Kelton family were still around, keeping an eye on their beautiful property that over the years, was a place of refuge to so many seeking freedom. If you find yourself in the Columbus area, make plans to stop by...you might just catch a glimpse of Mrs. Kelton guarding her home, or even a glimpse of Oscar finally made it home from war...in spirit form.

*Photos are from the Kelton House Museum website's Gallery
Posted by TheresaHPIR at 5:22:00 AM