The Legend of Lily: A Trans-Allegheny Ghost Story 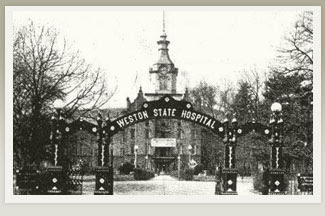 Earlier this month, The Trans-Allegheny Lunatic Asylum in Weston, WV was voted number one in the USA Today's Top 10 list of Best Haunted Destinations!  Appearing on such television shows such as Ghost Hunters and Ghost Adventures, the former mental institution has really made its impact in the paranormal community.

Construction on the massive Kirkbride Building technically dates back to right before the Civil War and the hospital, known throughout most of its modern life as the Weston State Hospital, accepted patients up through 1994 when it was finally closed.  For years, the building sat, not totally abandoned, and gaining a reputation for being a very spooky place indeed!  However, it wouldn't be until 2007 when the building was auctioned off and acquired by the Jordan family that details of TALA's haunting would emerge.

Perhaps the most well-known ghost story to have emerged is the tale of a little girl named Lily (or Lilly).  Lily is said to be a young girl, around the age of 9, who appears in a simple white dress or night gown.  Over the years, it is believed that she has interacted with paranormal investigators through EVP communication, ghost box sessions, and by moving toys and other 'gifts' left to her in a room now dubbed 'Lily's Room.'  So how was Lily 'discovered?'

On my last public investigation I participated in at TALA, our guide told us that Lily was pretty much the first ghost to make herself known, shortly after the new owners took over.  During their first year as new owners, the Jordans held a classic Halloween haunted house attraction in a small section of the main building. There were a number of scare actors working the haunt, including a teenage girl stationed at a room in the eastern corner of Ward 4.  This room, which is now known as Lily's room, is kinda right across where you turn from the main hallway into the older 'Civil War' section of the hospital, and this scare actor's job was to help keep visitors moving in the right direction.

In between groups of visitors, she heard a voice coming from the room behind her.  She turned to look and saw a young girl in white.  This girl looked....off.  The little girl then asked if she (the actor) had seen her mother.  Something about this whole thing must have raised red flags to this poor actor, because she told the girl she was going to go find help, and then she locked her into the room!  She then went and got a supervisor, who followed her back.  As expected, there was no little girl waiting in the room and no one else working that night had seen a little girl matching that description.

That tour was the first and only time I had heard this version of Lily's 'origin' story. But what the story leaves out is where the name 'Lily' came from.  An episode of Ghost Stories, which aired in April of 2010 notes that the name Lily came from Tammy Wilson, a psychic who toured the facility.  Wilson also saw that Lily's mother was a woman whose name started with an 'E,' who came from a prominent English family, and who gave birth while at the asylum.

Other stories have been shared about how Lily came to live at the asylum, but most versions generally agree that she was born here and died here, possibly of pneumonia, around the age of 9.  And, the basic story is rather plausible.  Not only did the hospital accept child patients, suffering from a range of disorders, but there WERE births here.  Some patients were already pregnant at the time of admittance, but it wasn't unheard of for a patient to become impregnated during her stay, either through consensual or non-consensual contact with other patients, and potentially, staff.

Whoever Lily may be or where she came from, she certainly is a favorite among staff and visitors alike today.  Her room is stuffed full of dolls, balls, a music box, and other toys left for her by well-meaning visitors.  Investigators have heard her light giggle in the area of her room, but elsewhere through the hospital as well.  She enjoys and tends to remember repeat visitors, and favors some of the more regular staff, who in turn, are very protective of her.

If you find yourself investigating the former Trans-Allegheny Lunatic Asylum, or even just taking one of the many awesome tours offered, take a moment to listen and observe.  If you're lucky, you may hear the faint giggle of a little girl trapped in time.

*For an excellent look at Lily's story, check out this article by Eric Olsen:
Trans-Allegheny Lunatic Asylum and the Haunting Enigma of Lily
Posted by TheresaHPIR at 1:32:00 AM