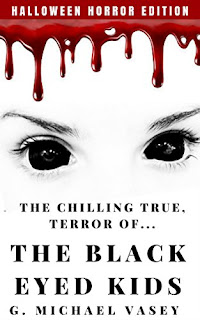 Author's Note:  "This is a compilation of The Black Eyed Kids, Your Haunted Lives 3, and the Black-Eyed Demons are Coming, with some new and supplemental material."

I've been interested in the phenomenon known as the Black Eyed Kids for many years now, but admittedly, when I featured these entities in a 2011 blog post (see The Black Eyed Kids), I was a little skeptical.  Tales of the BEK's seem to be a very modern construct, with the first report only dating back to 1998. However, I was correct in my prediction that as the years went by, more and more people would come forward with similar tales of children, usually appearing to be about 10-17 years in age, often traveling in pairs, that demand entry into one's home or vehicle.  These children, whose eyes appear completely black, will attempt to gain permission to enter one's home or car by asking to use the phone, asking for a ride, or otherwise seeking assistance.  They give off an impending sense of doom, and as soon as the intended 'victim' notices the eyes, these kids seem to get very irate.  They will leave without leaving behind any trace that they were there.  In some cases, other occupants of the home will be unable to hear or see the children, and believe that the 'victim' is talking to him/herself.

For years, there has been a lack of good information available for study.  Remarkably similar stories from witnesses all over the country would pop up every now and then, but there were few places where these tales were all compiled and analyzed.  With this book, G. Michael Vasey has done a good job in doing just that.  The Black Eyed Kids focuses on getting as many of these stories as possible in one place.  And, there is a bit of analysis and research into the many theories as to what these beings might be.  Are they aliens?  Are they vampires?  Maybe demons?  No one seems to know for sure who the BEKs are and what they could possibly want.

As this book is a mash up of several other works, there is a small measure of repetition and some problems with the fluidity, but overall, it was a fun and informative read. It's also a quick read and is definitely spooky enough for some October/Halloween reading material!  It's available in print form, as a Kindle ebook, and even as an audio book.


*Want MORE BEK reading material?  Check out my book review for David Weatherly's The Black Eyed Children.*
Posted by TheresaHPIR at 12:00:00 AM