Theresa Travels to the Midnight at Moonville Festival 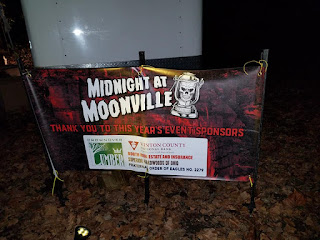 The haunted Moonville Tunnel in McArthur, Ohio is one of those haunted places that I've always wanted to visit, but just never got around to actually making the 1.5 hour drive to do so.  Moonville was once just a small coal mining community in a remote section of rural Ohio, and the railroad route through the area was a long, dark, and lonely trip.

For such a desolate area, there are a surprising number of deaths associated with the Moonville Rail Tunnel, and with such deaths, ghost stories naturally follow.  The most well-known ghost tale is that of the phantom engineer, Theodore Lawhead.  In November of 1880, Lawhead and his fireman, Charles Krick, were killed instantly when their train collided head-on with another train at Moonville.  Since that day, other railroad employees making the same journey have reported a misty white human-shape on the tracks.  Others have claimed that mysterious white lights without an apparent source have been seen along the tracks near the tunnel. The ghost was even mentioned in a Chillicothe newspaper in 1895:

"A ghost (after an absence of one year) returned and appeared in front of a freight at the point where Engineer Lawhead lost his life. The ghost is seen in a white robe and carrying a lantern. "The eyes glistened like balls of fire and surrounding it was a halo of twinkling stars" - Chillicothe Gazette, 17 Feb 1895" 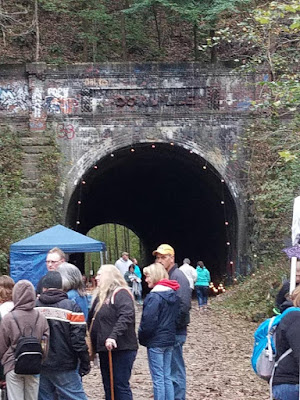 Today, the area around Moonville Tunnel is just as rural and isolated as it was 100 years ago...if not more so.  However, the Vinton County Tourism board and the Moonville Rail Trail Association have worked diligently to preserve the history of the area and covert the former rail route into a beautiful nature trail.

This past weekend, the two organizations held their third annual Midnight at Moonville Festival!  This festival is a wonderful little get-together that not only helps raise funds for the rail trail, but also helps share and preserve the haunted history of the area. There was live music, story-telling, wagon rides to the nearby cemetery, paranormal presentations and a ghost hunt by P.R.I.S.M., tons of photo ops, and plenty of local crafters and vendors.

The festival ran from 3 pm to 11 pm and we arrived a little before 6 pm.  Parking was $5 and then we took the free shuttle down the road to the actual festival.   Both Aaron and I were really impressed with how awesome the festival was set up!  The shuttle dropped us off near the majority of the food vendors.  It was a short walk over the bridge and up the hill to where we made a left turn into the heart of the festival.  From the trail head all the way to the actual tunnel, vendors lined the path selling a variety of Moonville Tunnel t-shirts, souvenirs, and other crafts. There were also a ton of really cool spooky, interactive props that were the perfect selfie spots.

A small stage was set up with plenty of straw bale seating.  We took a small break to get our bearings and enjoyed several songs by Steve Zarate. Steve had somewhat of a folksy rock flair and played guitar as well as harmonica in addition to singing.  Also playing that evening were Todd Martin of Mothman, Ben Davis, Jr., and Bart Wiseman.

After enjoying some tunes, we were ready to make the trek down the path to the haunted tunnel!  Moonville Tunnel isn't very long, and it isn't very wide...but even in the broad daylight it still gave off some spooky vibes. Knowing the amount of tragic history that happened in this isolated area, its easy to see why the tunnel is a favorite spot in the paranormal community.  We didn't see or experience any ghosts in the tunnel during the festival, unfortunately...but we may not be able to say the same thing about the cemetery!

Although most of the festival's activities were free (aside from the parking fee), they were offering horse-drawn wagon rides to the small local cemetery for $10.  The cemetery was close enough that you could have walked to it (and many people did) but we opted for the wagon experience and were glad we did!  Our driver was a lively character and our horses were rather stubborn.  The ride to the cemetery was mostly uphill, and one of our horses, a young stud by the name of Moose, didn't appreciate the hard work of pulling our loaded wagon.  Twice he refused to budge and even decided that the other horse, Bill?, I believe, wasn't doing his share of the work and nibbled on him in protest, lol.  We stopped just short of the cemetery and our driver gave us a brief history of Moonville and the cemetery...and an explanation that Bill's normal partner had been injured this summer and was recovering.

The cemetery was actually quite small, tucked away into what is now a forested area.  However, the tree cover wasn't always so...lush.  At the time of the first burials, most of the trees in the area had been cleared for the local iron furnaces. Anyway, the sun was setting as we entered the small space, which was decked out for the occasion.  Luminaries lined the trail, faux candles hung from a tree, and wooden cutouts peeked out from every available corner.  Our driver told us that the wooden figures were built by prisoners down in Chillicothe! 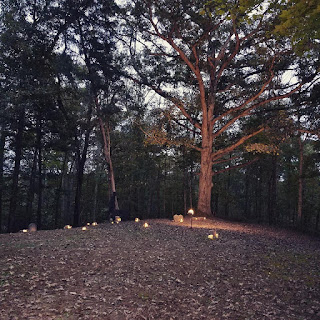 We didn't have too long to spend at the cemetery, but since it was so small, we had plenty of time to take a good look around and take pictures.  Our trip down the hill was much smoother and we arrived safely back at the main festivities.  A couple of interesting things happened while at the cemetery, though.  Aaron checked his phone's charge at the beginning of our short wagon ride to make sure he had enough juice to take video once we got there.  However, by the time we made the trip and Aaron tried to take a photo, he noticed his phone was at 0%.  He hadn't received any of the normal low battery notifications, it just...died.  About the same time he had noticed his phone battery was dead, I had noticed something off in the woods.  At about a height of 8-9 feet, I saw what looked like a very concentrated ball of fog, about the size of a basketball, making its way down through the trees before it just disappeared.

Unfortunately, that was really the only strange thing that happened that night, but we had a great time, nonetheless!  I had an eerily accurate tarot card reading, and came home with a Moonville Tunnel drawstring bag, a sticker, and the book, A History of Moonville, Ohio and a Collection of its Haunting Tales, by William M. Cullen.  Aaron purchased a Moonville Tunnel shot glass and a hand-crafted wooden Moonville Tunnel Rail Trail sign.

If you get a chance to visit the Midnight at Moonville festival in the future, I'd highly recommend it! It was a really fun way to spend the evening, and everyone we encountered was very friendly and helpful.  All the volunteers that came together to make this festival happen seem to be really passionate about bringing awareness of Moonville's history and its future endeavors to as many people as possible.