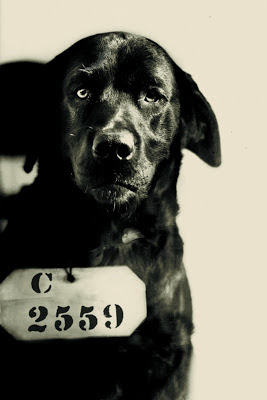 Construction of Pennsylvania's Eastern State Penitentiary began in 1822 and opened in 1829, serving inmates up until 1971.  Over the years, this literal textbook example of incarceration has housed many notorious and even famous inmates...some not even human!

According to legend, a black labrador retriever named Pep was sentenced to life without parole on August 12, 1924.  His crime?  Pep allegedly killed then Governor Gifford Pinchot's wife's favorite cat.  The governor used his executive powers to have Pep incarcerated for the murder and subjected to the same mugshot process as all the human inmates, even being given the prison number of C-2559.

It's an awesome story, but as many such fantastic tales, isn't exactly true.  The truth is...Pep WAS a bad dog, but he wasn't a cat murderer.

During Governor Pinchot's first term as governor, he received Pep the puppy from the nephew of his wife, Cornelia Bryce Pinchot.  The nephew was a breeder of labradors and for awhile, Pep was a cherished member of the family.  But, like many of his breed, Pep had a nasty habit of chewing up furniture.  No amount of punishment could stop Pep from chewing up the cushions on the governor's outdoor sofa.  Unable to deal with Pep's bad behavior, the family decided that Pep had to go, but it seemed too cruel to euthanize him.

Luckily a trip to Maine inspired the Governor.  According the the governor's son, Pinchot observed therapy dogs used in prisons to boost the morale of the inmates.  Upon returning home, Pinchot discussed the idea with his friend Herbert Smith, who happened to be the warden of Eastern State Penitentiary.  Pep was then given to the prison as a gift and the famous mugshot was taken as either a publicity stunt, or a joke.

Pep lived at Eastern State for the rest of his life.  By some accounts, he was "transferred" to Graterford Prison when it was built in 1929, but other sources believe that he simply accompanied the prison work crew back and forth during its construction and that he died in the early 1930s at ESP, where he was buried somewhere on the grounds.

So how did the story spread about Pep's crimes?  From papers archived at Grey Towers National Historic site, the governor's former home, it is largely implied from the governor's son that the stories were made up by a newspaper reporter with a sense of humor looking for an interesting story to boost readership. And where there's one legend, there's bound to be more.

In the paranormal field, Eastern State Penitentiary is largely noted as being one of the most haunted locations in the United States.  Many groups, including those from popular television series, have caught evidence and had personal experiences involving the former inmates of the prison.  Since Pep is such an integral part of the prison's history, some believe HIS spirit is still roaming the halls of the place where he was loved and cherished by guards and inmates alike.  Visitors have claimed to have heard the jangling of dog tags and even the howl of a dog echoing through the metal cells.

Today, you can own a little piece of Pep's history.  The Eastern State Penitentiary website and gift shop sells some memorabilia has Pep's mugshot photo on a T-shirt, mousepad, and coffee cup.  You can also pick up a set of dog tags in Pep's name, and this cute little plush Pep doll! 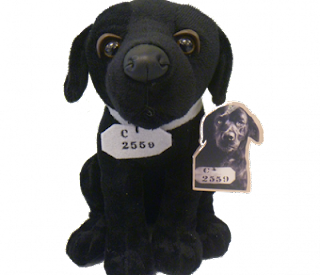