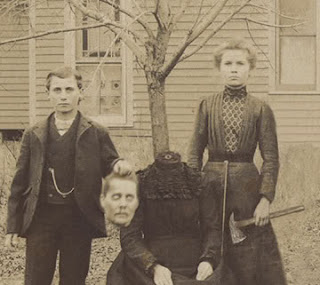 This is the Buckley Family. The children’s names were Susan & John. As a Halloween joke, the kids in the neighborhood were going to get a dummy & pretend to chop its head off. The Buckley children thought it would be hilarious to actually kill their mum, so when the kids walked up the door they got an axe and slaughtered her. Once everyone figured out what they had done, they called the police, but the kids were long gone by then. The only picture of them was this photo, taken by a trick or treater. The mother's body was found half eaten.

Well, not exactly.  The above narrative is the one that is accompanying this photograph and floating around the web in force.  It is a popular Halloween subject, yet it is leaving behind a trail of confused individuals who want to know if this image is real or not.  The truth is...its KINDA real, lol.

This image is the artwork of Eddie Allen, who creates changing portraits for the Haunted Memories site.  You've probably seen similar works on the shelves lately...portraits of old-timey subjects that take on a horrifying twist when looked at from a slightly different angle.  This particular image is titled Midwestern Matricide, and the inspiration behind the creepy image can be found at the link provided below.  As for the actual story...I'm not sure if its the brainchild of the artist himself, or simply someone trying to create their
own viral internet sensation!

For more paranormal and ghosty fun, such as the photo above, paranormal news, or updates to this blog, please follow Theresa's Haunted History on FaceBook!
Posted by TheresaHPIR at 7:39:00 AM