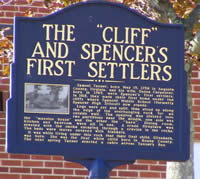 In 1812, Samuel Tanner and his wife, Sudna Carpenter Tanner, became Spencer's first permanent white settlers.  They made their first home under the cliffs where Spencer Middle School now stands, and that is allegedly where their daughter, Elizabeth, was born.  Elizabeth is credited with being the first white baby born in the area.

The Tanners weren't the only settlers to make use of this convenient natural phenomena, and many white and Indian families used the cliffs and caves throughout the area as either camping grounds, or temporary shelter until more permanent homes could be constructed.  This unique style of living would eventually lead to one of the area's most prolific ghost legends.

According to a story told to WVGhosts by Edward Hensley, one such cave-dwelling family lived in an area known as Steel Hollow Road.  A man, along with his wife and three children, made a cave there their home in the early days of Roane County's settlement.  As winter approached, the man left out on a hunting trip to ensure the family had enough food to last the winter.  While he was gone, the wife and the three children came down with a fever.  With the mother too ill to properly care for the sick children, the three wailed non-stop.  Finally, the mother, in her fever-induced state, gathered the strength to smother the children to death, one by one, in order to stop the constant crying.  The father came home from his hunting trip and found the mother, rocking her dead children, telling him to "Be quiet.  The children are sleeping."  Local legend dictates that due to this traumatic play of events, visitors to the area could hear the sounds of ghostly children crying in the area of the caves well into the 20th century.

The gentleman reporting this incident decided to see for himself whether the legends were true or not, and upon investigating the cave in question, DID witness the pitiful sounds of a crying baby at midnight.

But who WAS this family?  Public records aren't the greatest for this time period, and if the children's deaths WERE reported and recorded at all, its very likely that the cause of death was simply listed as "fever."  The WV State Archives available online only go back to 1856 in Roane County, and during that time and the years following, there are literally tons of deaths attributed to scarlet fever, typhoid fever, or simply...fever.  This ailment would sometimes take out entire families, including young sibling groups.  One can only speculate the gravity of a similar situation in a much earlier time, when doctors were scarce, and "cave-dwelling" was the way of life for so many.

Photo and much more information on Spencer's earliest "cave-dwelling" citizens can be found at the Living Appalachia website.