The Drunk in the Graveyard 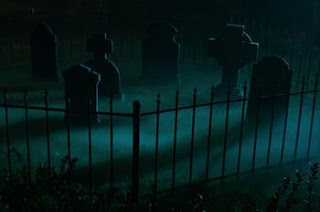 It's Friday night, so you know what that means!  This week's tale has been passed around for years, and there are many versions of it floating around.  This tale is from this site!

One dark, windy night, just outside Doncaster in Yorkshire, England, Neil, the town drunk was meandering his way home after the pub had closed. Somehow Neil got turned around and ended up walking through the graveyard in St Mary's church instead of taking the Tadcaster road home.

The wind howled louder and Neil thought he could hear a voice calling his name. Suddenly, the ground opened up in front of him, and he fell down, down into an open grave. He could still hear the voice clearer and louder now, calling to him. Neil knew it was Satan , coming for him just like the vicar had said, on account of him being the town drunk.

The hole was very deep and inside it was pitch black. His eyes adjusted to the darkness and after a few moments, and he made out a form sitting in the darkness with him. It called his name, and he scrambled away in fear, trying to climb out of that terrible grave. Then the figure spoke to him, 'You can't get out,' it moaned.

Neil gave a shout of pure terror and leapt straight up in the air, caught the edge of the hole in his hands, and scrambling out for his very life, he ran for home as fast as he could go.

Inside the open grave, his neighbour Tony sighed in resignation. He, too, had fallen into the hole a few minutes before his friend and had thought that together they might help each other climb out. Now he was going to have to wait until morning and get the gravedigger to bring him a ladder.
Posted by TheresaHPIR at 12:11:00 AM