Hitting the news this week is a Craigslist post from LAST week.  On March 10, 2013 an ad was placed on the Philadelphia Craigslist site under the category of Collectibles:


A week after the accident I went to the accident and scooped up minor parts I saw lying on the ground. The parts are all remotely tiny, and all fit in a shoebox.
I don't want them anymore because weird shit has happened since I put it under my bed.
I guess it's because it's a weird thing to have, but I was a huge Jackass fan and thought it would be a cool something to have.
If you want proof they are his parts, I have pictures of the crash site I took myself.

On June 20, 2011 Ryan Dunn, star of MTV's Jackass, was driving his 2007 Porche 911 home to West Goshen, PA after a night of partying with fans at the West Chester bar, Barnaby's of America.  The crash happened around 2:30am when the Porche, reaching speeds of up to 132mph, left the road, collided with a guardrail, flipped over into the woods and caught on fire.  Dunn, who was driving, and his passenger were killed, presumably instantly.  Dunn was identified by his hair and tattoos, but it took longer to identify his passenger as Jackass Assistant, Zachary Hartwell.
Investigators on the site claimed that this was one of the worst wrecks they had ever seen.  The car was torn to pieces except for a door that flew free, then was incinerated in the blaze.  An autopsy later revealed that Dunn was in fact drunk at the time of the crash.  He is buried in an Ohio cemetery. 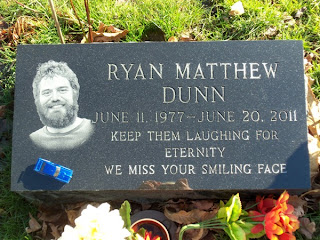 So here we are almost two years later and this ad pops up on Craigslist, insinuating that there is possible paranormal activity, aka "weird sh*t" associated with the physical remnants of this tragic accident.  It makes one wonder why it took this long for the "collector" to sell his/her treasures.  Certainly if there were any lingering psychic residue or paranormal attachments, it would have manifested before now...right?
Usually when we see something like this (usually on eBay, but I guess those new rules are working, lol) its a ploy to turn trash into a small fortune, but it seems like the fact that these "artifacts" are associated with Ryan Dunn and this high-profile crash would probably garner a fair price all on their own.  There are plenty of "death collectors" out there who'd "kill" for a piece of celebrity death...pun fully intended.
I've sent an email to the seller for more information...I'll let you know if he/she responds!
Original CL Listing
Update January 2020
I recently came across a video by the YouTube Channel Beyond Creepy offering a little more information about the paranormal circumstances surrounding this horrific accident. Apparently, Dunn's close friend and Jackass co-star, Bam Margera, had a violent, unexplained episode in a rental van, where he busted up windows and tore out the speakers for no reason.  It turns out that this happened at the exact same time that Dunn had wrecked.
Also, on the one year anniversary of the accident, a newspaper delivery person had a frightening experience while out early one morning. In the area of the accident, he pulled over to check the weather on his phone.  Before pulling back onto the road, he saw two figures sitting on the guardrail, facing the woods.
Posted by TheresaHPIR at 11:23:00 PM