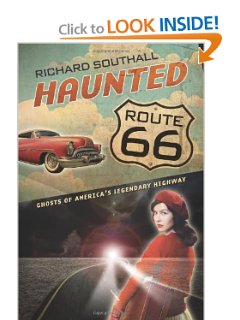 At first glance, it doesn't look like today's book review subject has anything to do with West Virginia or the tri-state.  However, its author, Richard Southall, is actually from West Virginia!  Those involved in ghost hunting, whether in the tri-state or not, will probably recognize Southall's name from one of his other books, How to Be a Ghost Hunter, which has become a textbook for so many starting their own investigation groups!

Anyway, as the title suggests, the subject matter of this book is not really related to the tri-state, but concentrates on the history and haunts of America's Highway, Route 66.  Stretching from Chicago, Illinois to Santa Monica California, this historic route covers 8 states and 2500 miles...plenty of room for ghosts!

There's a great little introduction into the history of Route 66 itself, which officially opened in1926, and each following chapter deals with a particular state along the route and its ghostly inhabitants.  At 228 pages, its packed full of wonderful stories, some popular staples in America's ghost lore, and some lesser known tales.

This was a fun read and I learned a lot about some more obscure hauntings that are fairly creepy!  There is also plenty of history added to enhance and set up the ghost information.  However, this book wasn't exactly what I expected...I was expected the locations to ALL relate directly to the highway itself.  That's not the case; since the road was constructed to incorporate many previously existing main streets through little towns, a lot of places in the book have a history far beyond that of the road's official opening.

Also, not all the locations are located right along the route, lol.  There are some states where Route 66 only travels a handful of miles through, and with much of the original route inaccessible today, some chapters include locations for the individual states up to 3 hours away from the original Route 66.  And while its not what I expected, it works.  I think its a clever way to concentrate on a certain region of hauntings without being limited to just a state by state type of list.  There's a cohesiveness that is combined with a certain diversity, which makes this a very interesting compendium of haunted locations.