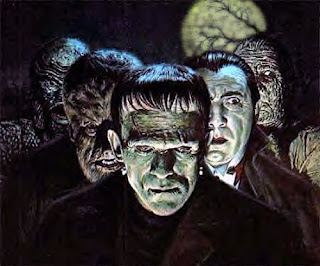 I thought that I was going to go out with a bang during my last week and a half of October...but alas, I went out with a whimper.  Tours, parties, and other Halloween related activities just didn't leave much room for movies...and left me too tired in the evenings to crank up the Netflix without passing out before the opening credits ceased to roll.

However, I did manage to cram in ONE last horror film for the month of October, and this one seriously was horrific.

I'm a HUGE fan of Rifftrax, so any time the cinema at the Huntington Mall shows a live simulcast of a "riffing," Aaron and I try to go.  This round was the epic classic Birdemic: Shock and Terror. This is actually a fairly new film,  produced in 2008, but the graphics look like something out a middle school film class's "C" file.  The acting isn't any better, nor is the storyline, which features a very astute argument against global warming, lol.  Not even the Rifftrax guys could make this one bearable and the pooping (or spitting--couldn't tell) of acid by the birds was disgusting.  At least...the popcorn was good!

It was a sad end to a sad challenge, but I managed to crank out a total of 9 films that I probably would not have bothered to see otherwise...except of course, for Sinister, lol.  Aside from Sinister, I'm going with the Inn Keepers as being my top choice for this year's challenge!

Want MORE scary movie suggestions from Theresa?  Follow Theresa's Haunted History on FaceBook for recommendations and news on what to watch...and what to avoid!
Posted by TheresaHPIR at 12:22:00 AM