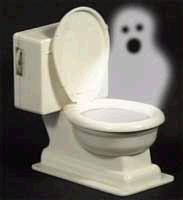 November 19th marks a very unique day.  All over the globe, people will be celebrating World Toilet Day on that date.  In honor of the holiday, I wanted to share with everyone an interesting facet of study for those in the paranormal investigation field.  Please enjoy!

When investigating claims of a haunting, researchers will often note that these supposedly haunted locations will often have something in common---no matter how widespread over the area the alleged paranormal activity occurs, there seems to be a heart of the haunting, or a focal point where things are the most active.

A haunted building's focal point, or "heart" can be just about anywhere, but statistically it tends to be a location central and accessible from all parts of the building, and a location that sees regular traffic from the living inhabitants of the home or business.  Therefore, while its not usually THOUGHT of as a heart of the haunting, a BATHROOM tends to follow this set criteria, and while perhaps not the most well-known or discussed place for a focal point, reports of bathrooms being haunted are certainly not uncommon.

So...why are bathrooms so haunted?

Well, we've first got to take a look at the many things that are associated with bathrooms that can be mistaken for paranormal activity.  I promise, I will try to leave the sillier, more "obvious" things such as phantom and/or demonic odors and hellacious moaning sounds for the more sophomoric authors on the subject, lol.  But those things aside, there are some major issues in bathrooms that mimic paranormal activity, and the first is a toilet that seems to flush itself by unseen hands.

I do a lot of witness/client interviews for my investigation team, HPIR, and I've seen the issue of the haunted, self-flushing toilet come up numerous times.  In fact, we also have a popular story that we tell on our ghost tours involving a lonely spirit who leaves his own home and makes his presence known to the neighbors in a similar way.  The concept of the creepy toilet is so common and so widely believed to be paranormal, that I actually keep a folder articles on the phenomena printed out and ready to stick in our client education packets that we give out.  But if its not the sign of a ghostly presence, what the heck is making a normal, otherwise working toilet flush itself?

I am not a plumber, so for the best explanation for why this happens, please see any number of great articles online, including the one I will be quoting:  eHow's Why Do Toilets Flush by Themselves, written by Steven Stymes.   According to the article:


The toilet's tank refills with water not because the toilet's handle has been touched but because the tank has a leak somewhere, which allows water to escape from the tank. When the water level drops below a certain point inside a toilet's tank, the toilet will detect the drop in the water level and will take action to replace the lost water. Because phantom flushing comes from toilet tank leaks, you will hear phantom flushing from the toilet periodically until you find the leak and take action to correct it.

So basically, you have a leak somewhere, and the toilet is trying to regulate its water levels.  These levels can also be disrupted when there's a break or issue with a water main or other pipe...and I've even seen this become an issue in buildings located near fire hydrants, especially when those fire hydrants are in use.  Luckily, the article cited above has some ways to diagnose and correct the problem of a phantom toilet flush caused by a leak or similar situation.
But toilets aren't the only plumbing issues that can and will fool even the most die-hard investigators.  There's also a widespread issue with faucets turning themselves on.  These faucets don't just spurt out water for no reason, the knobs can actually be seen eerily turning from the OFF to the ON position.  As unnerving as that may sound, once again, there is a very common, natural explanation that doesn't involve a ghostly presence.  If you're a fan of SyFy's Ghost Hunters, you'll see that the Roto-Rooter boys-turned-ghost investigators have debunked this one, but if you haven't in short here's one explanation of what happens:

When there's a build up of pressure on the tap, it can press against the screw and cause it to pop, turning on the faucet by itself.  This usually is more often seen in older faucets, especially those over 40 years old, and usually only happens with the hot water tap.  A loose seal can also be a huge problem with a quick and easy fix....a cheap metal washer replacement.  However, when in doubt, it might be a good idea to consult a plumber, for either toilet or faucet issues, just to rule out a bigger problem...and to save yourself expensive damage that may be incurred from attempting a fix on your own, lol.

Those are the two major things that cause false positives to paranormal activity, but there are a host of other things to take into consideration depending on what type of activity is being experienced.  Electrical disturbances could simply be electrical problems.  Weird noises could be pipes knocking around, and doors that open or close on their own accord could be explained away in numerous ways.  After all of these factors are ruled out, that leaves us with the question of how and why would a BATHROOM be haunted?

According to one website, an average person will spend about 3 years of his/her life in the bathroom...and that's a pretty big chunk of time to leave a lasting impression in a location.  It's not just the time itself, however, that is responsible for these imprints...its also the range of emotions that accompany some of the many uses of a standard bathroom.  The bathroom is where you excitedly primp for a first date, or other big occasion, spending hours making sure you look just right.

The bathroom is often where we go in the home for a little privacy, and where we can lock ourselves in and have a good cry under the disguise of a running shower when needed.  Unfortunately, the bathroom is often chosen as a location for those suffering from depression and other emotional ailments to end their own lives...or at least make that attempt.

The bathroom is also where we go when we are sick.  I know I've had some illnesses where the bathroom became my best friend...and a place where I wished I would just cease to exist--anything to be free of the barrage of a stomach flu.  But the bathroom is also where I keep first aid supplies...so its the first place I run to take care of minor cuts and things of that nature.  And, unlike those who CHOOSE to end their lives in the restroom, there are those who unfortunately do end their lives, from accidents or illnesses, taking their final breaths in their own bathroom.

In short, there's a lot of emotions popping around in a bathroom, and a lot of chances for human emotions to actually imprint here, but the architecture of a bathroom may also lend something to the haunting.  By popular theory, running water acts as an energy source for paranormal activity, and you've definitely got that there.  If you're into the feng shui set of mind, bathrooms are usually not very 'open,' lol.  Not all restrooms have any type of window, and most have only one way in, and one way out, trapping that energy we talked about earlier.  The presence of mirrors doesn't help out here, as all it does is serve to help bounce that energy around, instead of letting it flow freely out.  Those same mirrors can also add a huge touch of superstition, as they are regarded in the metaphysical world as being a portal between our reality and that of the paranormal.  And, in fact, many ghostly reports of haunted bathrooms do deal with apparitions being seen in the mirror (NOT talking about Bloody Mary, Candy Man, or Biggie Smalls, here) or messages being scrawled in the condensation of the mirror after a hot shower.

Now, the messages and hand prints in the steam can sometimes be explained away by previous prints and writings, only showing up with the help of the steam, but what about the apparitions?  Could mirrors really be a portal?  In Victorian times, all the mirrors in a home were covered with a black cloth when a person died, so that their spirit wouldn't become trapped in the mirror, but how many people do that today?

One last thing to consider when we discuss haunted bathrooms is of course, our level of vulnerability.  Many activities that take place in the bathroom require one to be fully or partially nude, or in a position where there's no quick escape route should something be seen or heard, lol.  While there is a popular psychic that makes it very clear that ghosts will not bother you while you're in the bathroom or silently peek at you showering or dressing, I have a hard time believing that to be true of ALL ghosts, based on the many reports of seemingly legitimate activity experienced in these locations.  Just because one's physical body dies, does not mean that all their earthly characteristics die with it....if someone was a jerk in life, or didn't respect boundaries, can we be sure that's gonna change?  Rather, I think that our position of vulnerability does offer us some measure of awareness, as we're letting our guard down, symbolically and uh...physically, lol.

So, when investigating a location, see what claims are being made about the bathroom, and proceed with your investigation and recreation of events as you would any other spot in the building...just make sure that ALL on site are aware of any cameras that may be set up there!

Looking for haunted restrooms here in the tri-state?

Bobby Mackey's in Wilder, Kentucky is known as Hell's Gate, and supposedly, both the mens' and womens' restrooms are haunted.  The mens' room is the site of an alleged attack on a non-believer who badmouthed two of the resident spirits.  These spirits threw a trashcan at the man and otherwise, beat him up fairly badly, as the claims go (from a very drunken man, and his drunken witnesses, lol).  The ladies' room is where an apparition of a cowboy was spotted in a mirror.  Unfortunately for our purposes, HPIR pretty well explained this one, as the mirror in question was positioned in such a way that it was reflecting into the bar (there were no doors) so anyone in a cowboy hat walking past the entrance could have easily shown up.

For a little closer to home, the Keith-Albee Theater features not one, but TWO haunted ladies' rooms.  HPIR's investigation results, as well as my personal experience in the upstairs restroom are available on this site at:  Keith Albee.

*Photo of the ghost-in-toilet was found on the UNcyclopedia site, on an article from UNnews about the White House bathrooms being haunted.*