Happy Zoo Lovers' Day!  That's right---according to Holiday Insights, a website devoted to cataloging the smaller, and often pretty bizarre, holidays throughout the year, today is a day dedicated to zoos and the people who love them. Here at Theresa's Haunted History of the Tri-State, that means today is the perfect opportunity to talk about HAUNTED zoos!

Previously, I've featured the Phantom Lioness at the Cincinnati Zoo and the ghost of a murdered zookeeper at the Houston Zoo. Personally, I find these tales fascinating and lately, have been on a quest to read about as many haunted zoos as I could find. There are a lot of them throughout the United States, but today I want to focus on Chicago's Lincoln Park Zoo. Not only does it have a huge range of paranormal activity and reported sightings of spooky things, but it has a pretty dark history to back them up.

The Lincoln Park Zoo is an old one. It was established between 1868 and 1869 when the land was turned over to the zoo from the city of Chicago. The reason why the city had this land to give was because it was removing the city burial grounds!  According to Chicago Quirk, the cemetery dates back to around 1837 when the state of Illinois set aside the land for a burial ground in Chicago. Between 1843 and 1859, the location was the site of tens of thousands of burials of Chicago citizens. However, around the time of the Civil War, people began to favor the more beautiful, expansive rural memorial gardens over small, crowded city cemeteries.  Not to mention, the citizens of Chicago were getting sick of having a burial ground right in their city. Not only do cemeteries take up valuable real estate that could be used by the living, but at the time, a doctor named John H. Rauch, warned that the close proximity of the graveyard to local water sources could be a major health hazard.

So, they began the laborious process of removing the bodies, but for various reasons, not ALL the bodies were removed.

However, the park and the zoo continued to grow and flourish. And, as you can imagine, has picked up quite a reputation for being haunted!  It is not usual for a visitor or member of the zoo staff to see people in Victorian dress, simply walking around the property, oblivious to the fact that over 100 years have passed since they've died. One woman in particular is seen in a white dress, and prefers to manifest in and around the Lion House.  She also is seen in the Ladies' Room mirrors (located in the basement of the Lion House)---but as soon as the witness turns around, no one is there.

Phantom footsteps, disembodied voices, slamming doors, photographic anomalies, and flickering lights are all the norm as well, and can be experienced throughout the zoo. There also seems to be a floating pocket of negative energy that makes people physically ill when they encounter it in various locations throughout the park.

Another hot spot for activity is a fairly recent addition to the zoo.  In 1962, ground broke for the zoo's Barn, a location featuring farm animals and demonstrations on farming. When ground broke for the building, a body was unearthed.  After not much help from authorities, zoo director, Dr. Lester Fisher made the decision to simply return the body and build the barn over top it. Various EVPs have been captured here, along with plenty of reports of other spooky happenings. (A short excerpt from a ghost tour explaining the Barn's hauntings can be found on YouTube.)  What's even weirder is that Dr. Lester himself seems to be haunting the zoo, even though he's very much still alive!  His voice has been captured on EVP as well, near the primate exhibit.

It seems obvious that the majority of paranormal activity (minus Dr. Fisher) stems from the fact that the zoo was built atop a cemetery, where bodies are still occasionally being found.  However, the paranormal activity has had a LONG history at this location, and some people believe that the ghosts are the lost souls from nearby suicides. Between 1894 and 1919 a bridge was located across the lagoon, just past the zoo's parking lot. It is estimated that between 50 and 100 people managed to kill themselves by jumping off or hanging themselves from the bridge. It was such a popular place to commit suicide, that the bridge was actually called 'Suicide Bridge' on postcards! 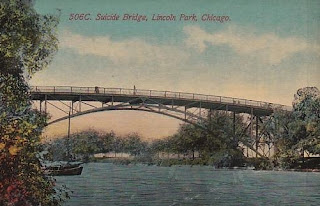 If you'd like to experience the ghosts of the Lincoln Park Zoo for yourself, you're in luck!  The zoo is open year-round and offers FREE admission!  There aren't too many places throughout the zoo that are free from activity, but you might want to spend some extra time at the Lion House, the Barn, and the cafe. If you're interested in a more in-depth paranormal experience, paranormal investigator and author, Ursula Bielski offers tours throughout October. Just keep an eye on the zoo's website for more info!