Book Review for Ghosts From Our Past 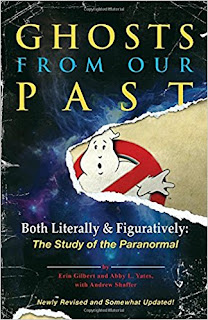 Title: Ghosts From Our Past: Both Literally and Figuratively: The Study of the Paranormal
Authors: Erin Gilbert and Abby L. Yates, with Andrew Shaffer
Published by Three Rivers Press (2016)
Amazon Purchase Information

Ghosts From Our Past is a little different than the normal books I review here at Theresa's Haunted History. Even if you're not familiar with the work, you might have guessed from the photo that this is a movie tie-in book for the newest Ghostbusters film, starring Melissa McCarthy, Kristin Wiig, Kate McKinnon, and Leslie Jones.

The premise of the book is that it was originally written by McCarthy and Wiig's characters when they were undergraduate students in the mid-1990s. While the original book flopped, it was re-released years later by Abby, much to Erin's chagrin. Divided into three sections, the book discusses Abby and Erin's early experiences and how they met and got into ghost hunting, followed by a section dealing with their research, and finally concluding with a section on their methodology.

Obviously, there is a lot of creative licensing involved in this book, and it is largely a fictional work. However, I wanted to include it here because there really is some good, factual information about the history of paranormal research and general ghost hunting protocol. There's even a section in the back containing a few forms that are useful to those conducting a paranormal investigation.

Another aspect to consider is this: There are plenty of fictional elements included in this book. As we've seen over the years, people tend to take such fictional elements from movies, TV, books and other media and try to pass them off as something real. If you're someone who studies the paranormal, or maintains a website/Facebook group that deals with those topics, it might be a good idea to familiarize yourself with this information. That way you can easily debunk a fake entity as something seen in Ghostbusters, not traditional folklore.

You don't need to have seen the movie to enjoy this book. However, I would recommend it since the book actually plays a pretty big part in the movie itself. Of course, fans of the movie will be the ones who will appreciate this book the most, but I'd still encourage any paranormal enthusiast to give it a try. It's a quick, fun read that I think a lot of people who grew up with an interest in the weird can relate to. I really enjoyed it, and even took a few notes for further research ideas!  But, if you're more into paranormal literature that's strictly non-fiction, you can always check out my Book Reviews page for further suggestions. Happy Reading!
Posted by TheresaHPIR at 12:00:00 AM

Labels: Book Reviews, funny, Ghostbusters, Ghosts from our Past, how to be a paranormal investigator, Paranormal Investigation