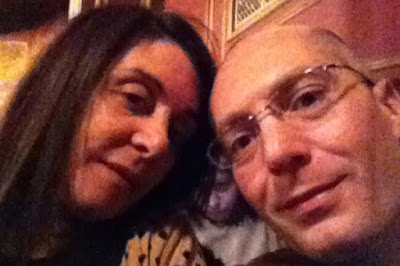 On January 28, 2012, Stuart Cheveralls and his partner Natalie visited London's Dominion Theater. They were there to see the We Will Rock You show, and after settling into their seats to wait for the show to start, Stuart used his iPhone 4 to snap a quick selfie of himself and Natalie.

While going over the pictures the next day, Stuart noticed that he and Natalie weren't alone! At the time of the photo, the couple was sitting at the end of a row of seats. The two seats directly behind them were unoccupied---they'd be filled later on by two men who arrived late to the show. But what showed up in the photo was definitely not an empty seat, nor was it a dude arriving late to the show!

What Stuart saw made the hair on his arms stand up. What showed up directly between him and Natalie was the ghostly pale image of a young girl! Intrigued, Stuart began doing some research on the theater, and found that it had a haunted reputation.

The Dominion Theater was built atop the site of the old Meux Brewery. On October 17, 1814, tragedy struck when a vat of beer burst. Over 3500 barrels of liquid were released, collapsing a wall and part of the roof, and reigning terror among the nearby citizens.  One of those citizens was a 14 year old girl named Eleanor Cooper who was a servant of Richard Hawes.

According to the British Library's Untold Lives Blog, "Richard Hawes gave evidence at the coroner’s inquest held on Wednesday19 October that he was in the tap room of the Tavistock Arms at 5.30pm on the previous Monday when he heard a crash. The back part of his house was beaten in and everything in his cellar destroyed. Beer was pouring into his pub and across the street. Eleanor Cooper was in the yard washing pots and her body was dug out from the ruins nearly three hours later. She was found standing by the water butt."

In total, 8 people lost their lives, many of them children. It's no wonder that staff and visitors to the Dominion Theater have reported the phantom sounds of a giggling child and the apparition of a brew-master! But the big question is...

Does this photo really show a ghost and if so, is it the ghost of Eleanor Cooper? Although Stuart claims that there was no trickery involved, many people don't agree. What about you? Do you think this is the real deal, or not?