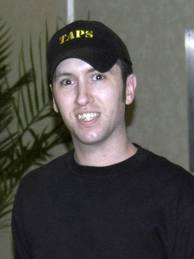 Once again, the paranormal community has come together in a display of love and support for one of our own.  This morning, it was reported that Brian Harnois, formerly of Ghost Hunters and Ghost Hunters International, left what is being described as a suicide/goodbye note on his FaceBook.  The note, which appears to be no longer available for viewing reads as follows, according to sources on the TAPS18+ message board and the Who Forted Blog:

I wanted to write this note to say goodbye to a certain few that need to know what happened to me. I have fucked up my life again to the point of no return this time. I am homeless, jobless, and pennyless. I have 2 wonderful daughters who deserve a lot better than what I can give them, and deserve better in life than what I would ever be able to give them. I love them both very much and this goes out ot them the most. I am sorry daddy is such an extreme fuckup. I could never get my crap together and you both deserve better then this. I love you both very much and will always be there to see your acomplishments in life. Because I know you will both do amazing things. You both will probably never know the amount of love I have for you two and that is my fault. I have been an extreme mess for almost all of my 36 years on this earth and enough is enough. I have lied, stolen, and done some other really bad things, but the one thing I can say I did right was bringing you two into the world. I love you both babies and will miss you SO MUCH!!! I have not seen or talked to you both in over a week and it has killed me more and more every day. I am in a deep depression and know I will not come out of it. As for you Michelle, I know now more than ever that I was in the wrong for 90 percent of the 7 years you have known me. I don’t know if you will ever read this, but if someone could pass this on to her it would be great. I can’t call you because I am to afraid of what might be said as I know I can never have you back. You were my one true love. I realize that now more then ever. You were my soul mate and someone that I could have lived with forever. ANd to know I messed that up is to much for me to bare anymore. You were my world, and I shit all over you. I know it was wierd the way we met but I think it was fate that we did. I am SO SORRY that I messed things up like I did. Please forgive me one day. I wanted to give so much to you but in the end I couldn’t even scrape two pennies together for you and that was the last straw. I love you Michelle, and I always will. Goodbye my love and goodbye my 2 darling babies. I will miss all 3 of you!!


Since that message, Brian has been missing and it is rumored that there have been in the past few weeks some nasty messages from his ex-wife concerning issues of non-payment of child support and missing a birthday party.  No one has had contact with him in several days and his cell phone is turned off.  Friends and family, including Grant Wilson, former TAPS/Ghost Hunters colleague, have been searching.  Local law enforcement is also involved in the search, as Brian is now listed as an Endagered Missing Person.  Anyone with information is encouraged to contact the Warwick, RI police department at (401) 468-4200.  Please spread the word.

I personally have never been a fan of Brian's work in the paranormal field, but its tragic that anyone, in the field or not, would feel like this was the only way out.  Please keep Brian and his family and friends in your thoughts tonight, and pray for a happy ending.  He has two young daughters who need him.  I will update if any there is any new news.

And if you're finding yourself feeling desperate and alone, please remember that there is always someone willing to listen:

Update:  Wife, Michelle, has confirmed the disappearance.  This article sheds a little more light on recent interactions between the two concerning the messages I posted about earlier:  http://www.examiner.com/article/michelle-harnois-confirms-brian-harnois-still-missing

Update 2:  Jason Hawes just tweeted that Brian has been found, safe and sound!  This development came around 11am Monday, when Michelle, Chip Coffey, and Jason all started tweeting around the same time that he had been found and was on his way to receive psychiatric treatment.  No further details are available at this time.  Thank goodness that this didn't end as badly as it could have!

Update 3:  I've posted a follow-up article containing Brian's own words on the situation.
Brian, the Aftermath