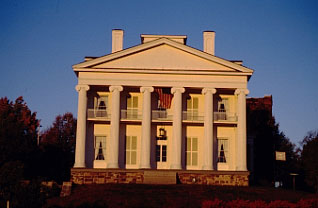 I'm feeling inspired; inspired to finally get some more work done on Volume I of my Haunted America series!  That inspiration brings you the tale of the beautiful, yet tragic Follett House of Burlington, Vermont.

This massive Greek Revival structure was built around 1840 as the private residence of prominent citizen, Timothy Follett.  Follett, who among other things, was a New England shipping tycoon, judge and lawyer, commissioned the work of famous architect Ammi B. Young to design the home.  In 1845, Follett was named the first president of the Burlington and Rutland railroad, and for the next few years, his palatial home became not only a showpiece, but a hub of socialite activity.

Unfortunately, Follett's success would soon come to an end.  In 1853, after going bust, he was forced to turn ownership of his beloved home over to rival, Henry Campbell, of the Vermont Central Railroad.  Follett would not only lose his fortune, but his health and mind as well, dying in a sanitarium in 1857.

For several years, the home remained as a private residence for several different families before being turned over for mission work in 1892.  From there, it served a wide array of purposes, including ownership by the Knights of Columbus and the Veterans of Foreign Wars.  In 1978, the Pomerleau Agency, a real estate development company, took ownership of the badly dilapidated structure and began a restoration project that would bring it back to its former glory.  The home now serves as a real estate office for the company.

It also seems that Timothy Follett has decided to take back the home that was rightfully his.  His spirit is attributed with the disappearance of objects off workers' desks that are found months later in odd and random places.  He's also attributed with messing with the lights in the evening.

The home is featured on Thea Lewis' Queen City Ghost Walk, and has been investigated by Lewis and the Vermont Spirits Detective Agency.  While finding no hard evidence of ghosts there, aside from a possible disembodied voice of a woman singing, many still eagerly attend these tours, hoping to catch a glimpse of Timothy Follett, still watching over his most prized possession.

More history and interior photos of the Follett House
Posted by TheresaHPIR at 7:52:00 AM