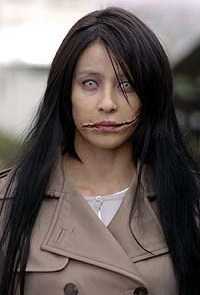 Today's blog takes us far, far away from the tri-state. The legend of Japan's Kuchisake-onna has fascinated me for years and it has been interesting to see 'new' versions of the legend pop up on different websites! If you ever plan on visiting any Asian country, especially Japan, you might want to pay attention to this blog---it might just save your life.

The Kuchisake-onna is more commonly known as the Slit-Mouthed Woman, so named for her grotesque appearance.  Beginning around 1979 in Nagasaki Prefecture, school children walking home alone would report that a very beautiful woman with long, black hair and wearing a beige trench coat would approach them.  In these days, her mouth was covered by the collar of her coat or a scarf.  She would approach the child and ask him or her if they thought she was beautiful.  If the child said no, the woman would take out a large pair of scissors from underneath her coat and immediately kill the child.  If the child said YES, the woman would remove the covering from her mouth, revealing an horrific gash.

She would then repeat the question, "Am I pretty/beautiful?"  If the child said no, he would be cut in half with the large pair of scissors.  However, if he child said YES, the Slit-Mouth Woman would let him off easily---the scissors would be used only to slash the child's mouth, copying the woman's own injury.

In later years as a fear of germs would lead many Japanese to wear surgical masks out in public on a regular basis, the Slit-Mouth Woman kept her beige trench coat, but upgraded her mouth covering.  Her back story has also changed over the years.  In the original tales, the Kuchisake-onna had been the beautiful, yet unfaithful wife of a samurai.  After discovering that she had cheated on him, the samurai slashed his sword across the woman's face, marring her great beauty so that no one would ever love her again.  With the 2007 release of the film, Carved, a back story developed to explain that the ghost was that of a woman who was hit and killed by a car in the 1970s, an accident that left a disfiguring wound across her face.  She allegedly was a child murderer. 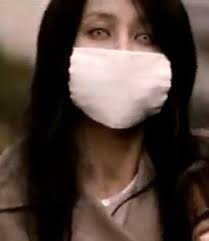 So, if you DO encounter the Slit-Mouth Woman you're doomed right?  Well, not exactly.  For one thing, she only seems to go after school children, so if you're of a more mature age, you're automatically pretty safe.  She only goes after children who are walking ALONE, so if you are a child, make sure you take a buddy with you wherever you go.  But, if you still find yourself a victim of the Slit-Mouth Woman, you'll need to trick her!

Make sure to tell her she's beautiful when she first asks.  Then, when she takes off the mask to reveal her wound, don't answer her with a yes or no.  Instead, when she asks if you find her pretty, tell her you find her average, or so-so.  Better yet, answer her question with a question: ask HER if she thinks YOU'RE pretty!  In her confusion, you'll be able to get away.  If for some reason, you mess up and the scissors come out, grab a handful of candy and throw it at her. She'll be forced to stop and pick it all up, giving you ample time to run away.  I hear she's particularly fond of butterscotch...