The Ghostly Rowboat of Lake Bomoseen 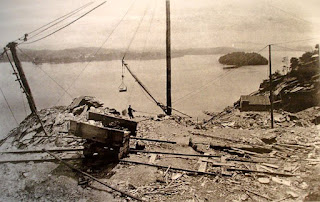 Today West Castleton, Vermont is a ghost town, sitting empty along the banks of Bomoseen Lake.  However, it was once a thriving community filled with mills and slate quarries populated with many migrant workers of Irish, Italian and Slavic descent. The boom began around 1850 and maintained throughout the 1800s.  Unfortunately, by the early 1930s, the quarries were drying up and slate was becoming less and less in demand.

In 1929, Samuel Hazard, who owned and operated the Lake Shore Slate Company died and left a huge chunk of what was known as West Castleton to his step-daughter.  In 1959 she gave 365 acres, which included a number of historic buildings to the state.  The next year, that land opened up as Lake Bomoseen State Park. Visitors can now visit the area and hike old West Castleton, taking the self-guided Slate History Trail tour.

And if they are lucky, visitors to the park might also even spot the ghostly rowboat of the lake. As legend goes, a popular tavern was located across the lake from West Castleton on the eastern shore. It was a favorite watering hole for many of the Irish quarry workers, and one evening three friends took a rowboat out for a night of drinking and merry-making. The men never returned to West Castleton.  It was presumed they drowned in the lake, but their bodies were never recovered.  All that was left was an empty rowboat, floating out in the middle of the lake.

Witnesses have claimed that on nights when the moon is full, a phantom rowboat can be seen silently gliding across the lake.  Some say the oars don't make a sound, nor a visible ripple as they hit the water.  Others say that the rowboat is completely empty, guided across the water by some unseen force.