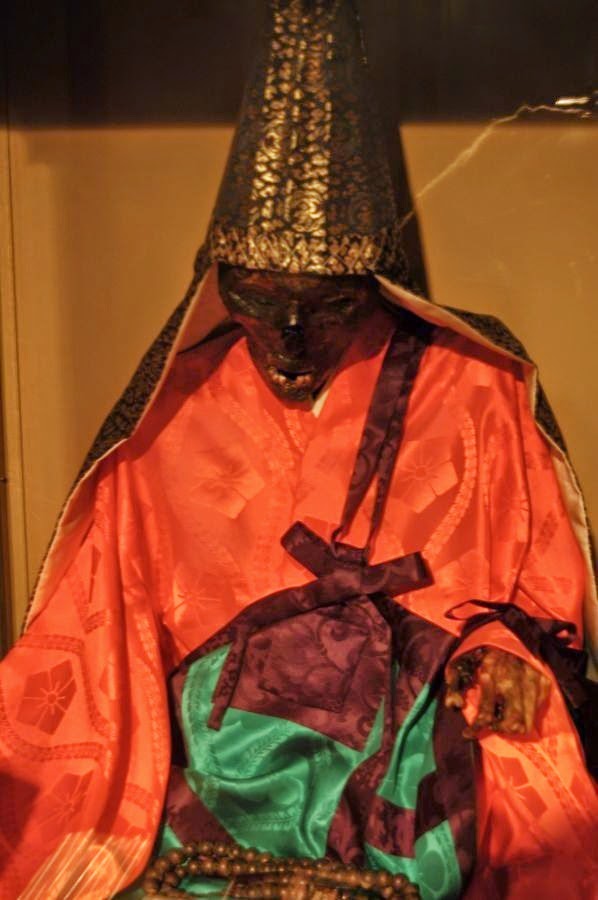 In northern Japan, there is a small Buddhist sect known as the Shingon School.  For centuries, select Shingon monks have undergone what to the western world appears to be a fairly creepy form of suicide. Yet, to the Shingon, the process was merely a pathway to total enlightenment.  Hundreds would attempt the ritual between the 11th and 19th centuries before the practice was outlawed in 1879, but only a couple dozen would succeed and become the Sokushinbutsu:  The Living Mummies of Japan.

The process of becoming one of the Sokushinbutsu mummies took 2000 days, or right around six years.  The first 1000 days, the monk in question would subsist on a meager diet of nuts, seeds and berries, and undergo strenuous physical exercise in an effort to rid the body of as much fat as possible.

For the next 1000 days, the diet was changed to nothing but bark and roots.  This further slimmed down any remaining body fat, and began removing any excess moisture in the body.

When the second 1000 were almost up, a tea made from the sap of the urushi tree was added to the diet.  This tea is highly toxic, and the sap is normally used to lacquer bowls.  The toxicity of the tea caused intense vomiting, furthering the removal of body fat and fluids from the body.  However, the poisons would remain in the body, which would serve as a means of killing off any bacteria that could cause the body to rot and deter any insects from devouring the flesh.

After the 2000 day process ended, the monk would seal himself, seated in the lotus position, in a small, underground chamber with nothing more than a small air pipe and bell.  Each day the monk survived, he'd ring the bell to alert his brothers.  When the ringing stopped, the air tube was removed and the tomb sealed.  The tomb stayed sealed for three years before being dug back up.  If the monk's body had decomposed, the tomb was resealed. 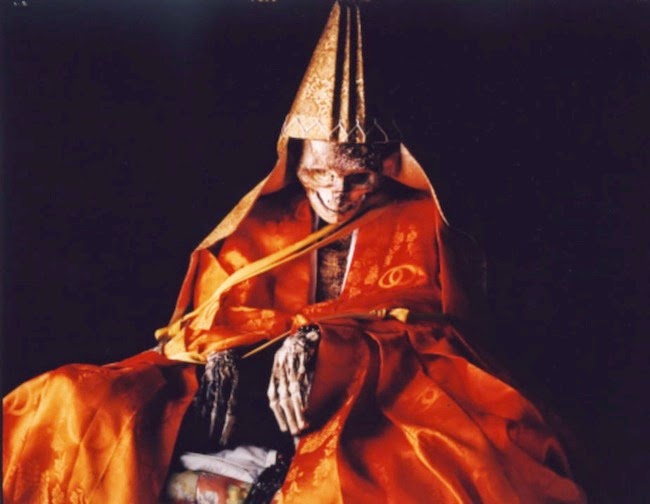 But...if the monk had mummified, he was removed from his chamber.  The body was put on display for all to see, and he was raised to the status of a Buddha.  Today, there are only between 24 and 28 existing mummified Sokushinbutsu, 16 of which are on display to the public.  Of these, most were mummified near the Dainichi-Boo Temple, which is located by a spring with a high arsenic content.  It is theorized that the arsenic of the spring contributed to the success of the monks in this specific area.

No one is completely sure how or why this process of mummification started, but it is believed that Kukai, the founder of the Shingon sect, brought the practice from China.  One early story illustrates possibly the first "modern" attempt at Shingon mummification:

In the 17th century, famine struck Japan.  One Shingon monk took it upon himself to bury himself alive as a way to end the famine.  Apparently, it worked!  His body was dug up three years later, and to the shock of the rest of the monastery, his body was naturally mummified.  The other members of Shingon developed the method listed above as a way to ensure the self-mummification process, and thus, achieve enlightenment as well.