The Hami, or "Dangerous Thing"

I thought I'd do a special Weird Wednesday post for you, and post this fascinating photograph that I ran across on one of my favorite websites, Cracked.com!  While the article was hilarious, not much was mentioned about the origins of the photo and I knew I had to learn more. 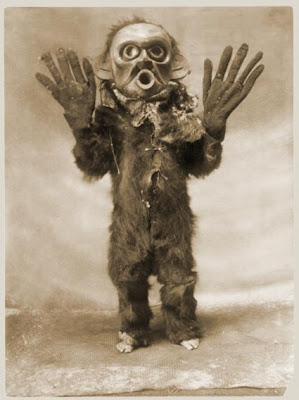 This photo IS a real photograph taken in 1914.  It was taken by a man named Edward S. Curtis, who around 1895, discovered that he had a passion for both photography AND documenting the Native tribes around the Pacific Northwest states and into Canada.  These tribes were some of the last "untouched" indigenous people in an increasingly modern world bent on cultural assimilation of these peoples.  In order to preserve their heritage, Edward Curtis secured money from none other than JP Morgan, and set off on a 20 year quest that would leave the world with some amazing photos.

In this shot, a Koskimo Native is dressed as a Hami, which literally translates to "dangerous thing."  One can't help but notice the similarities between the furry ape-like creature's appearance and the infamous Sasquatch, so known for "haunting" that section of the world.  While I haven't yet discovered if there IS in fact any connection with this creature and Sasquatch, I did find out a little more about the tribe, and what the costume was used for.

The Koskimos (or Gusgimukw) are part of the larger Kwakwaka'wakw tribe who lived around British Columbia and Vancouver Island areas.  The Kwakwaka'wakw are sometimes identified erroneously as a whole by a different sub-set, known as the Kwakiutl.  In any event, the Koskimos actually settled around the area of Quatsino Bay, located on the northern part of Vancouver Island.

The Hami costume was just one of many costumes used by the tribe and was worn during the Nunhlim Dance.  The Nunhlim Dance depicted the young man of the house returning home, magically restored, after being abducted by some type of spirit.  This dance takes place on the last night of Tlu'wulahu, which is a four-day ceremony held prior to the Winter Dance.

In a serendipitous twist, a few days before I saw this photo, I learned of a very interesting book by David Paulides titled Missing 411-Western United States and Canada.  I have yet to read this book for myself, but apparently the theory behind so many missing persons cases of this area is that people are being abducted by Sasquatches!  The Sasquatches tend to return children most of the time, but according to the author, see older members of our species as food...perhaps this Hami creatures is a definite nod into the fact that it IS a dangerous thing that will eat you, but if you're lucky, as is the young man in the Nunhlim Dance, you might just be returned, magically restored.

Original Cracked.com Article--May contain offensive language and material
Posted by TheresaHPIR at 7:00:00 AM