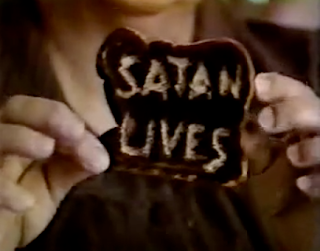 Would make a good name for a metal band, but actually, its the topic of today's Friday Night Funny!

In 2009, a video clip was posted to YouTube which showed the single greatest thing ever to be shown on television.  It was a clip from May of 1984 in which Richard Dominick of the Sun tabloid interviews June O'Brien about her demonically possessed toaster.  As you'll see in the video below, the toaster emits the voice of star Eli Wallach saying "I am the Devil," spontaneously catches fire, and of course, leaves satanic messages such as "Satan Lives" scratched onto burnt pieces of toast.  However, the absolute greatest moment from this clip comes when Dominick asks O'Brien why she keeps the toaster after all that.  Her reply?  "When its all said and done, it makes good toast!"

This absolute gem of investigative reporting aired on the Today Show, much to the delight of  a very young Bryant Gumbel.  Jerry Springer and Boyd Matson produced the segment, with producer Boyd Matson doing the voice narration.

Not long after, it was reported that this segment was actually just a part of a larger segment dealing with supermarket tabloids.  The piece goes on to also show Dominick interviewing a woman who sex with aliens and a man who was saved from drowning by his Howdy Doody doll.  The segment also featured interviews with Dominick himself, as well as others from the Sun.

Here's the ENTIRE clip, including not just the toast segment, but the previously unseen by modern Youtubers sections on Howdy Doody and alien hooker: