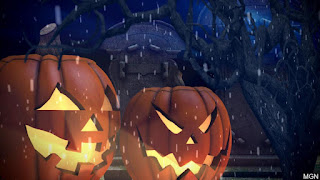 So far, my Halloween isn't going too great.  Not only was trick-or-treat rescheduled for Saturday due to the weather, but I just found out that Facebook is not allowing me, or anyone else, to share my blog content due to a 'violation of community standards.'  Not only does my blog contain NOTHING that would violate community standards, but I never got any notification of what exactly is in violation and who/when/why it was reported.  A good chunk of my blog traffic comes from Facebook, so this is really gonna hurt until it is resolved!  Plus, I failed miserably at the October Ultimate Blog Challenge---my mother-in-law was re-admitted to the hospital and my mom had to have a minor procedure done that still managed to knock her down for awhile...so I've been pulled in about a hundred directions. Blogging has had to be put aside for awhile, which always gets me down.  So while I'm sitting here trying not to cry, I thought I would try to be productive and at least start publishing some content to share through other channels!

Halloween is my absolute all-time favorite holiday, and last year I discovered a handful of historic photographs on the WV History on View website depicting Halloween festivities in West Virginia!  These are my favorites!  I hope you're having a much better Halloween than I am.  Stay safe out there...and stay spooky! 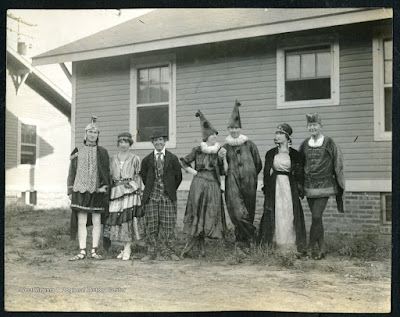 This photo dates to 1919 and shows a group of young people in Nitro, WV headed to a masquerade party!  Nitro was a WWI boom town, named by the federal government after nitrocellulose, the main ingredient used in the ammunitions that were manufactured there during the war.  This picture comes from a little less than a year after the war's end, when hopefully there was much to celebrate that Halloween! 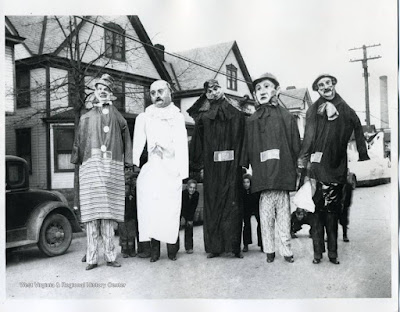 Is this a Halloween parade? Maybe a New Year's belsnickeling/mumming parade? The description from the WV History on View website only denotes that it is from Beechurst Avenue in Morgantown, West Virginia. I love these costumes, especially the masks!  There is something so magical about vintage, homemade costumes that really evokes a sense of Halloween for me!  Let me know in the comments below what YOUR favorite costume was growing up, and if it was store-bought or homemade! 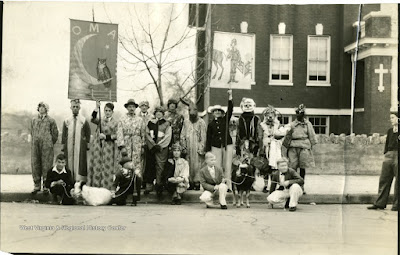 Okay, so I'm not entirely sure this is a Halloween picture (or maybe a picture from a theatrical production's cast), but this OMA group portrait in Front of St. John's, Martinsburg, W. Va., shows some awesome costumes!  I absolutely LOVE the OMA owl and moon banner...but, uh, what's with the goats???  Anyway, once again...

Happy Halloween from Theresa's Haunted History of the Tri-State!