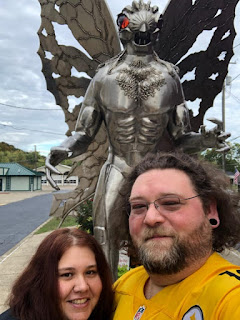 As difficult as my October proved to be, I still tried to have as much fun and cram in as many Halloween and spooky events as possible, and I think I did okay!  I never get to do everything that I want around the Halloween season, as there is just so much to do and I'm usually so busy...this year more than ever.  But, as long as I get in a few events and try something new, I'm happy!  October 2019 was a somewhat special year for me as it was mine and my husband's first October together as a married couple.  He really got a dose of my Halloween and spooky obsessions!  Earlier in the month, I took him to his first visit to the Flatwoods Monster Museum in Sutton.  A couple of weeks later, we took a spur of the moment trip to Point Pleasant----home of the Mothman!

Same as with the Flatwoods Monster Museum, JR had never been to the Mothman Museum, seen the Mothman statue, or visited the notorious TNT bunker area!  I was determined that a sunny, temperate afternoon to ourselves was the perfect time to remedy that.  We had eaten a late lunch at Steak N Shake in Barboursville, so we hopped on over to Route 2 for a scenic drive into Pt. Pleasant. 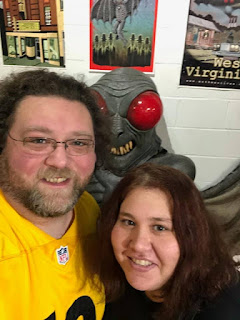 I love seeing people experience things for the first time, which is one reason why I LOVE blogging about my son's haunted travels with me.  It's the same way with my husband. Before meeting me, he wasn't really into ghosts, cryptids, and all things spooky.  However, he is a wonderful husband, and is always willing to indulge me of my interests.  As an added bonus, I think my ghostly tastes are starting to rub off on him a little...

Now, I have been to the wonderful Mothman Museum many times, but I still enjoy seeing the new stuff, reading the articles, and browsing around the gift shop For a relatively small space, there's a LOT to see and do.  I was thrilled that JR seemed so impressed with the museum, especially the movie props. He asked me a ton of questions, which I was happy to answer and eagerly took in all that the museum had to offer.  I'm pretty sure he even went straight to Reddit with his newfound knowledge of one of West Virginia's most unique museums.  My favorite part, however, was snuggling up in the Harris' Steakhouse Diner room, watching part of a Mothman documentary together.  I almost didn't want to leave, but I wanted to make sure that he experienced ALL the Mothman goodness in Pt. Pleasant!

Obviously, that included the requisite photos with the Mothman statue.  Of course, I being the 10 year old boy that I am, made sure that JR got to see back side of the statue, featuring a well-formed metal buttocks!  He was bemused, but not nearly as delighted as I always am at Mothman's rump. He was, however, much more interested in the TNT area. 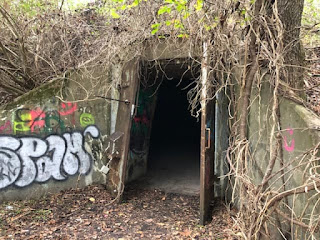 The weather was perfect for the walk out to the open igloos of the TNT area, once believed to be Mothman's stomping grounds. JR probably thought I was taking him out in the woods to kill him, especially as I led him through a thicket of branches and vines and past a heavy metal door into darkness.  As our eyes adjusted, I couldn't help but sneak in a kiss, because you know...there's no place more romantic than the TNT igloos, lol.  We talked about the graffiti on the walls, how the TNT area was significant to the Mothman story, took some pictures, and played with the unique acoustics of the igloo.  Again, I almost didn't want to leave.  Sharing one of my favorite spooky locations and my passion for the paranormal for the first time with the person I love is a memory I want to live on as long as the story of Mothman himself!