Before the practice of embalming was widespread, the fear of being buried alive was a very real one for many.  This story comes from a February 12, 1885 edition of a newspaper out of St. Louis, Missouri, although the event in question takes place in Hampshire County, West Virginia.  I found it shared on the West Virginia Heritage, History and Memories Facebook page and it appears to have been originally shared on the Hampshire History Facebook page.  It was noted there that the young woman did survive, but other newspaper articles stated that it was believed she'd be a 'lunatic' for life. 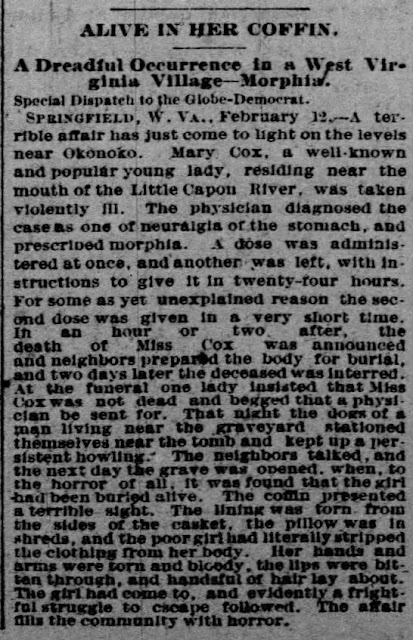 SPRINGFIELD, W.Va., February 12--A terrible affair has just come to light on the levels near Okonoko.  Mary Cox, a well-known and popular young lady, residing near the mouth of the Little Capon River, was taken violently ill.  The physician diagnosed the case as one of neuralgia of the stomach and prescribed morphia. A dose was administered at once, and another was left, with instructions to give it in twenty-four hours.  For some as yet unexplained reason the second dose was given in a very short time. In an hour or two after, the death of Miss Cox was announced and neighbors prepared the body for burial, and two days later the deceased was interred.  At the funeral one lady insisted that Miss Cox was not dead and begged that a physician be sent for.  That night the dogs of a man living near the graveyard stationed themselves near the tomb and kept up a persistent howling.  The neighbors talked, and the next day the grave was opened, when to the horror of all, it was found that the girl had been buried alive.  The coffin presented a terrible sight.  The lining was torn from the sides of the casket, the pillow was in shreds, and the poor girl had literally stripped the clothing from her body.  Her hands and arms were torn and bloody, the lips were bitten through, and handfuls of hair lay about.  The girl had come to, and evidently a frightful struggle to escape followed.  The affair fills the community with horror.

Theresa's Note: I found this story, word for word, in several other publications, including this one from the Rock Island (Illinois) Argus. I also did a little searching to see if I could find any evidence that Mary did go insane (and who could blame her after that ordeal?), but didn't find anything substantial.  I did find several articles mentioning a Mary Cox from Harrison County who was deemed 'insane' and died at the Weston State Hospital, but the age range doesn't match up.  Either way, its a frightening story that I'm sure left an entire community, not to mention a young lady, shaken to the bone.
Posted by TheresaHPIR at 8:19:00 AM