The Headless Skeleton of Deer Island 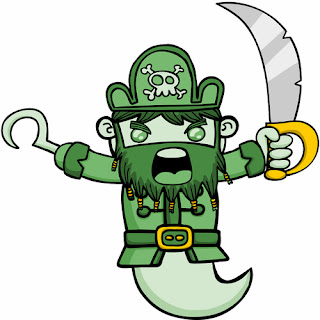 Aaarrrghh!  Today is Talk Like a Pirate Day, and here on Theresa's Haunted History, I'll be celebrating the best way I know how---with a pirate ghost story!  Today's addition to my Haunted America page is an eerie one from a small island just off the coast of Biloxi, Mississippi, known as Deer Island.

It was the early 1800s and two fishermen had just set up camp on the sandy shore of Deer Island.  As they sat around the fire, preparing their evening meal, they began to hear rustling coming from palmetto bushes nearby.  At first, they assumed that an animal must be causing the racket, as the wind was too calm to produce such activity.  But then, the rustling intensified to the point that the fishermen turned around...only to find themselves face to face...uh, well maybe not face to FACE...with a HEADLESS SKELETON!

Understandably, the two fishermen began backing up from the eerie bone man, and when they realized it was following them, they took off towards their boat at top speed.  The men left the island and all their belongings there overnight.  The next morning brought sunlight and bravado, and the men returned to collect their things.  There was no sign of their skeletal guest, but it is noted that later on, some money was found near the campsite.

The idea that money was found near the site sparked rumors that the headless skeleton must surely be the ghost of a deceased pirate.  A tale was told that many years before the fishermen made camp on Deer Island that fateful night, a pirate ship had landed on that same shore.  After the booty had been buried, the captain asked if any of his men wanted to volunteer to guard the treasure.  A naive, young man responded that he would do it, not knowing that it was customary for the designated security for buried pirate treasure was to be...supernatural.  The captain took out his cutlass, lopped off the man's head, and threw the body in the palmetto bushes.  The young pirate was true to his word, and his spirit, in the form of a creepy, headless skeleton, watched over the treasure for many years.  It seems as though he has finally retired, as no 21st century encounters with the skeleton have been recorded.

This fascinating bit of local lore was first recorded in a Mississippi newspaper column titled "Back With Father Time in the Early Days of the Mississippi Coast."  The article,"Headless Ghost Haunted Deer Island In Olden Times," appeared on May 20, 1922 and was written by local historian, Anthony Ragusin, aka Mr. Tony.

Mr. Tony was introduced to the story of the Deer Island skeleton by 78 year old local, Eugene Tiblier Sr.  The Tiblier family had been in the Biloxi area since the French Colonial times and were respected citizens with a deep knowledge of the area's history.

*Information for today's blog came largely from a SunHerald article dated 17 October 2015:
Coast Chronicles: Stories of ghosts on Deer Island
Posted by TheresaHPIR at 12:00:00 AM