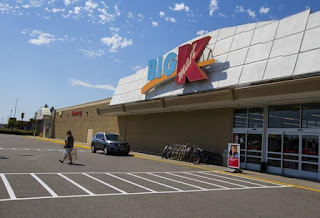 Awhile back it was announced that my local KMart store would finally be joining the long list of closed retail chains throughout the tri-state.  This store, which held on while other area KMarts bit the dust a couple of years ago, now joins Elder-Beerman, Magic Mart, Rite-Aid, and Toys R Us in becoming an empty and abandoned shell of a building.

There are numerous reasons why I hate to see this death trend in brick and mortar stores, and one of those is...where are all the ghosts going to go?  Retail stores, many of which are located in relatively new strip malls or shopping complexes, don't usually come to mind when it comes to spooky places with a haunted reputation.  But...there are more haunted retail stores out there than you'd think!  We've seen the infamous Toys R Us ghost photo taken at a Sunnyvale, CA location, and there's even a haunted KMart here in Parkersburg, WV.  Back in my early 20s, I worked at a haunted Dollar Tree where the resident ghost liked to walk the aisles after closing, unplug vacuums, and knock merchandise off shelves.  Today's blog, however, is about another haunted KMart---this one located in Coeur d'Alene, Idaho!

Okay, so in the spirit of full disclosure, the KMart itself isn't haunted.  The haunting involves an object housed within the store.  This KMart is home to a possessed cash register.

The story of the spooky cash register surfaced back in October of 2013 when a local newspaper in northern Idaho asked its readers to send in their own ghostly experiences for a Halloween piece.  One such story that came in was so fascinating that it got its own feature in The Coeur d'Alene Press!  Cashier Tamara Dobbs wrote in to share her experiences with Register two at the Kmart store, located at 201 West Neider Avenue.

Register 2 is accused of being possessed by a potential poltergeist because of its penchant for malfunction.  The older register is the only one in the store that is known for frequently freezing up, dumping transactions, and generally causing chaos for the cashier assigned to it.  When a manager is called in to assist with the problem, or when technicians are called in to service the machine, there are never any problems.  It seems like the ghost, whom employees believe to be a male spirit, only likes to mess with cashiers.

The Coeur d'Alene Press reached out to store manager, Lauren Larson.  Larson confirmed that the register in question was known to cause problems for cashiers and even referred to the machine as "an independent thinker" that regularly "loses its mind."

Unfortunately, it appears as if the Coeur d'Alene KMart closed last October.  I'm not sure if the register is still in use at another location, but if it is, today it would be 18 years old. I hope that wherever the machine ended up, its paranormal inhabitant can now find peace.