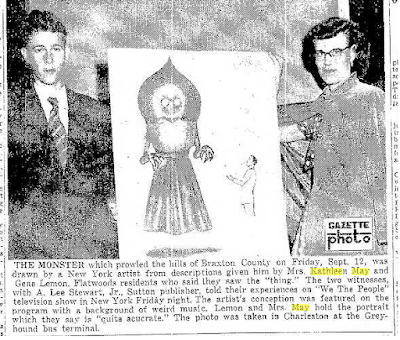 On September 12, a group of kids playing football noticed what they thought may have been a small plane crash outside Flatwoods, WV.  The boys, accompanied by two of the group's mother, a teenage neighbor, and a dog, grabbed a flashlight and made the trek up the hill to discover what was going on.  What they saw that night was, perhaps, literally out of this world.  The creature, which would be known as The Flatwoods Monster, the Braxton County Monster, or simply just 'The Being' was so unique in appearance, that even 66 years later, its form is immediately recognized.

Red face framed by a strange spade-shaped head.  Tiny, claw-like arms.  Glowing yellow eyes.  A green pleated skirt?!  What the hell was this thing? Some believe that the group saw a creature from outer space.  Others believed that it wasn't the creature itself, but a small vehicle or protective suit for a spaceman.  Some simply believed that the group chased down a meteorite and were spooked by a large owl seated on a low hanging tree branch.

No matter what you believe the Flatwoods Monster to be, it is pretty undeniable that its form is easily recognizable to many, in and out of the paranormal community.  The creature has been featured in video games, toys, lanterns, comic books, over-sized chairs, etc. There is simply nothing else like it in the world.  But...is the iconic monster image that we immediately recognize as the Flatwoods Monster REALLY a good representation of what the group saw that evening?  And where did the artwork for it come from?

The photo above is a clipping from a Charleston Gazette article dated Tuesday, September 23, 1952. The caption states that the drawing was made by a New York sketch artist based on the descriptions of the creature given by Kathleen May and Gene Lemon. It was most likely created when the pair, accompanied by Sutton publisher, A. Lee Stewart, Jr., traveled to New York City to appear on the television show, "We The People." As they told their tale and showed the image, which both witnesses agreed was accurate, eerie music played in the background for the audience at home. Later when they returned to West Virginia, a photo was snapped of May and Lemon at the Charleston Greyhound Bus Station. 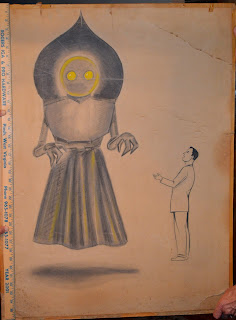 As the years rolled by, interest in the sighting waned, but then later saw a resurgence.  Aided by researchers, namely Frank Feschino, it was discovered that maybe the ridiculous, cartoonish portrayal of the creature wasn't EXACTLY what the witnesses had seen. What the witnesses had really seen was described as much more mechanical in nature, with the creature's flowing, pleated skirt really being similar to corrugated metal and its claw-like arms being more like antennae.  This updated version of  the creature's appearance can be found on the cover of Frank Feschino's book, The Braxton County Monster: The Cover-Up of the Flatwoods Monster Revealed.

Although perhaps more accurate, the newer version of the Flatwoods Monster's appearance is decidedly less fun than the older version and the original is still the main inspiration for artists creating memorabilia and souvenirs to this day.  And, as an added bonus...just recently the original drawing itself has been found!  Believed for years to have been lost, an anonymous citizen of Braxton County came forth and let the piece be photographed.  You can see the photographs over at the  Braxton County Convention and Visitor's Bureau website as well as find tons of information about West Virginia's 'other' monster.

*If you find yourself in Braxton County, make it a top priority to visit the visitor's center for a HUGE collection of monster memorabilia, souvenirs, and information on the creature and other attractions around the county!*