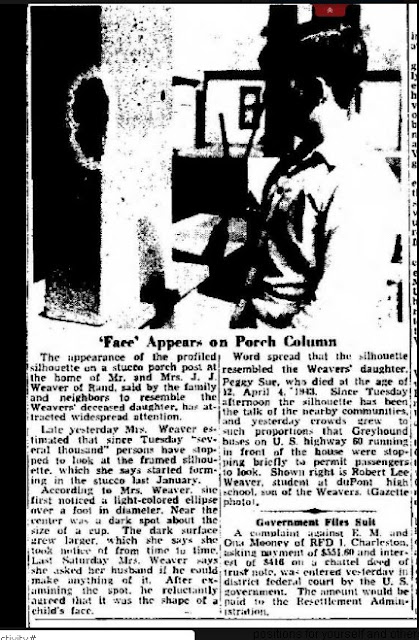 This is such an interesting lil' historic article from the Charleston, WV area.  Back in 1945, a family noticed a strange image on the stucco of their porch column.  The image looked like the silhouette of a girl's face...but not just any face.  The family who owned the home claims the face resembled that of their daughter, Peggy Sue, who died two years previously on April 4, 1943.  I really wish the picture I found showed a clear image of the silhouette, but I'll keep looking!  Here's the text from the article:

'Face' Appears on Porch Column
The appearance of the profiled silhouette on a stucco porch post at the home of Mr. and Mrs. J.J. Weaver of Rand, said by the family and neighbors to resemble the Weavers' deceased daughter, has attracted widespread attention.

Late yesterday, Mrs. Weaver estimated that since Tuesday, several thousand persons have stopped to look at the framed silhouette, which she says started forming in the stucco last January.

According to Mrs. Weaver, she first noticed a light-colored ellipse over a foot in diameter.  Near the center was a dark spot about the size of a cup.  The dark surface grew larger, which she says she took notice of from time to time.  Last Saturday Mrs. Weaver says she asked her husband if he could make anything of it.  After examining the spot, he reluctantly agreed that it was the shape of a child's face.

Word spread that the silhouette resembled the Weavers' daughter, Peggy Sue, who died at the age of 12, April 4, 1943.  Since Tuesday afternoon the silhouette has been the talk of the nearby communities, and yesterday crowds grew to such proportions that Greyhound buses on U.S. Highway 60 running in front of the house were stopping briefly to permit passengers to look. Shown right is Robert Lee Weaver, student at DuPont High School, son of the Weavers. [Gazette photo].
Posted by TheresaHPIR at 9:03:00 PM