The Braxton County Men in Black

It is quite possible that the first recorded encounter with the Men in Black occurred right here in West Virginia!  However, the location and the date might be a little...unexpected.

Those who study the strange and the unusual are probably very familiar with the period of high strangeness the town of Point Pleasant, West Virginia faced throughout 1966 and 1967.  Sightings of the legendary Mothman were also accompanied by tales of hauntings, sightings of other cryptid creatures, enhanced psychic abilities and ESP, and of course...encounters with UFOs and the Men in Black.  For those not familiar with the Men in Black (MIB) in short, they are usually described as rather strange gentlemen, wearing dark suits and driving dark cars that often claim to be representatives from the government.  They tend to harass UFO witnesses into thinking that what they saw was perfectly natural---and that there is no reason to question the matter further or report it.  Many times, these MIBs are described as being rather small in stature and having Asian features, such as olive complexions and slanted eyes.

Researcher John Keel covered the weirdness of Point Pleasant extensively and wrote several books about or containing stories and theories about just what was happening in this small town by the river.  He himself was harassed by the Men in Black, and his writings on them really were instrumental in bringing the phenomenon to the mainstream.  But...these sightings in the mid-1960s weren't the EARLIEST sightings of MIB in the Mountain State.

Those with an interest in UFO lore probably are also quite familiar with the 1952 Flatwoods Monster sighting, in which a group of kids, accompanied by the mother of two of the boys witnessed what many believe today to have been a downed UFO and/or its spooky inhabitant.  While I'm personally not familiar with any Men in Black sightings associated with this case (aside from a strongly worded letter to Ms. May allegedly from the Pentagon), the Braxton County UFO crash of 1952 is significant to this tale because...IT WASN'T THE FIRST TIME A UFO CRASHED IN BRAXTON COUNTY, WV!! 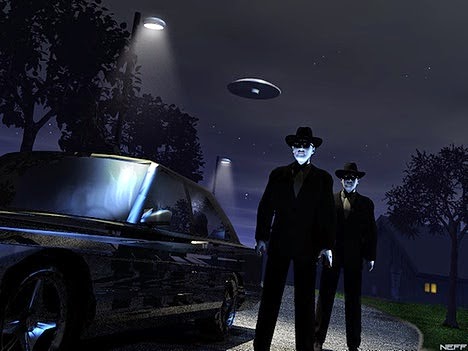 The following tale comes from John Keel's 1978 book, The Cosmic Question.  On pages 148-150, Keel relates the story told to him in 1967 from a retired newsman living in Weston, WV named John Cole.  In May of 1924, John Cole was called in to investigate the site of a possible airplane crash near Gem, Braxton County, WV and had a run-in with what were probably early Men in Black.  I've provided a link to the actual book, but here's a condensed version as posted on Reddit:


The late and groundbreaking Ufologist John Keel (John Alva Kiehl) reported a bizarre possible crash & retrieval case which involved strange characters, perhaps precursors of the modern day M.I.B. The incident is said to have occurred one afternoon in May of 1924 near the small town of Gem, West Virginia:
A farmer outside Gem in monster haunted Braxton County reported seeing an ‘airplane’ crash in a forest. Planes were a very rare sight in those days especially in West Virginia, and a crashing plane was big news. According to the farmer, the plane was very odd in that it didn’t seem to have any wings, didn’t make any noise and seemed unusually large. “As big as a battleship” is the way the farmer described it. A party of men, including the local sheriff and local newsman John Cole systematically searched the woods. Within hours they found the wreck in a small clearing.
According to Cole: “We weren’t the first ones there, though. There were already five or six men in the clearing. Some of them were dressed in black business suits, neckties and all, and that seemed damned silly in that neck of the woods”. Others were dressed in coveralls of a funny color---some kind of very shiny material. They were talking among themselves in a rapid-fire foreign language when they found them. They got real excited when they saw the search party. The men in coveralls ran into the wreck---like they were trying to hide. Some of the men in the search party were carrying guns and one of them said to Cole, “By God, they’re spies!” and he raised his gun. The strangers were all small, just a little over five feet tall, and they all looked like Orientals, with high cheekbones, slanted eyes, and dark skin. One of them spoke English. He told the men nobody was hurt, that everything was all right. He said he would call on the sheriff later and make out a complete report. There wasn’t much they could do. No crime had been committed. Nobody was hurt.
According to Cole while he was looking around he spotted a ‘little thingamajig” on the ground. He picked it up and decided to keep it. He doesn’t know why he just didn’t turn it over to one of “foreigners”. He put it in his pocket. They all finally went away, leaving the foreigners to fuss with their contraption. It didn’t look like much of a flying machine. It fact, Cole didn’t think it could fly at all. It was like a fuselage of a modern plane, with windows and all. But it didn’t have any wings, tail or propellers. And like the farmer said, it was mighty big. According to Cole at least seventy five feet long, it filled the whole clearing. He went back home in Weston and went right to bed. He was pretty tired from all the day’s hiking. About three a. m. somebody started pounding on his door. He got up and looked and there was an army officer standing there. He was dressed in one of those broad-brimmed hats they used to wear, with those leg wrappings and all. It was a U.S. Army uniform, but except for his clothes he looked just like those foreigners from the airplane. Slant eye, dark skin, but he was maybe a little taller. ‘You picked up something today,’ he said. ‘We need it back.’ Cole was half asleep and at first he couldn’t think what he meant. Then he remembered the metal ‘thingamajig” It was still in his coat pocket. Cole went and got it. “Is this what you mean?” He asked him. He didn’t answer; he just grabbed it and walked off without a word. He didn’t, seem to have a horse or a car. Cole shuffled back to bed. But the next day he started wondering about it. How had the supposed officer managed to track him down? A couple of days later he went back to those woods and found that clearing. It was empty. The grass and bushes were all crushed down where the airplane had been but there was no other sign of anything or anybody. After the Army ‘officer’ came by Cole figured that maybe it was a secret Army deal of some kind and he thought it was better to leave it alone.
Posted by TheresaHPIR at 10:37:00 AM