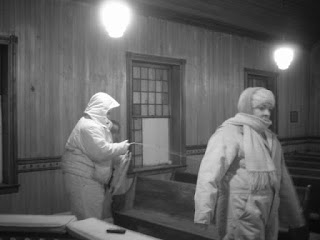 In February of 2012, HPIR was asked to make a return trip to Bruce Chapel, a small, historic church located in Mason County.  While the night was fairly uneventful, everyone was quite pleased when the evidence analysis yielded the following picture, which I've dubbed "Carrie's Ghost."

The photo in question was taken as HPIR members were wrapping up the investigation, and reeling in cables.  If you look to the right of investigator Carrie (on her left) you'll see a shadowy anomaly.  The camera used was a digital, full-spectrum camera, and the photo was taken by HPIR president and founder, Melissa Stanley.  HPIR has tried to recreate this anomaly, and has tried in vain to find a natural explanation...yet as much as we try, this photo cannot be neatly wrapped up with a textbook explanation.

A common theory as presented on the HPIR FaceBook page is that this is simply either part of Carrie's hood, or the shadow of such.  However, if you blow the photo up and look closely, it becomes apparent that it is not "attached" to her, and does not follow the same curvature of her hood.

Others believe it was a discoloration on the wall--another theory that is ruled out by comparison photos of the same area, showing nothing in that area.  Some simply believe that it was another person in the room, crouching down.  In fact, that's what Melissa thought before she presented it to the rest of the group for further analysis.  However, all investigators are accounted for at this time, and for one of US to have been in that area, the rest of the body would have been visible.

I personally researched the theories that it was either an IR shadow, or some other digital artifact caused by the full spectrum camera in combination with the overhead lights.  Again, as much as I tried, I couldn't make the shape and texture fit into a neat little scientific explanation.  Every comparison shot I studied just didn't match up.  So, at this point in time, the photo is not necessarily being toted as evidence of the paranormal, but rather, "unexplained."

To many of our viewers, however, this picture does show proof of the afterlife.  Many who view the photo claim to see a small African-American child, curiously checking out what is going on.  Some have claimed its a boy, and others claim it is a girl.  I honestly cannot fathom how someone gets a gender or race from the blob, but I do admit that it is "head shaped," and that the idea of it being an African-American child could coincide with the history of the location, which contains a small slave cemetery for the original family's slaves.

Whether this is a legitimate photo of an apparition or not, it has certainly caused a lot of local buzz!  After posting this on FaceBook, we had a handful of shares, which yielded an exponential increase in our page likes!  It seems like everyone wanted to see this picture for themselves, and comment on it.  And, surprising to me, the vast majority of commentators truly believed that we had captured something paranormal.

The mystery of "Carrie's Ghost" became even more intriguing this past weekend, as HPIR members partook in a local paranormal conference.  One of the speakers for the conference was Robyne Marie, a psychic medium with the unique ability of "photo scrying."  As part of her presentation, we were asked to submit some photos for her to analyze, and "Carrie's Ghost" was one of them.

While the anomaly wasn't mentioned, Robyne Marie did pick up SOMETHING in the photo.  What she allegedly saw was an elderly lady in the second pew, kneeling in prayer.  She psychically told the woman that she wasn't sure if this was a church or a courthouse, or what.  The lady, obviously confused, and believing she may actually be praying in what was NOT her church, allegedly got up and left!

At the time, this was actually pretty funny, but is now sort of worrisome, lol.  I hope Robyne Marie let the woman know that it was okay to come back and pray at this location!  Based on some history that the owner gave us, we do believe that we know the identity of this woman, so we sincerely hope that she's at peace, and feels welcome to come back to visit the church whenever she wanted.

And just a quick reminder...Bruce Chapel now has a FaceBook page, so go give them a LIKE!  The owners are now allowing public ghost hunting at the location for a small donation, which will go immediately back into the preservation and restoration of this wonderful site.  We got a very nice letter awhile back letting us know that our donation would help pay for a sturdy new front door!

For more info, see our HPIR Investigation page for Bruce Chapel, and if you can explain this photo, please do!  And please note:  the key word here is EXPLAIN.  Please break it down, and support your hypothesis with examples, and evidence.  Thanks!