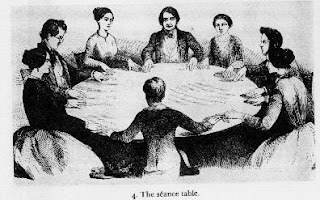 The terms apport and asport are two paranormal terms that are used frequently today...but got their start (and earliest connontations) during the Spiritualist Movement.

It wasn't uncommon for a spirit medium during a seance to ask an entity to "produce" or materialize an object out of thin air as a sign of the entity's presence.  Common manifestations included, but were not limited to, jewelry, perfume, flowers, coins, and other small objects.  Since the dying down (no pun intended) of the Spiritualist movement, and the fact that many of these apports, or spirit gifts, were deemed fraudulent, the term apport has come to be more commonly applied to other aspects of paranormal phenomena.

For example, the movie Poltergeist shows a scene in which the witnessing of a group of apparitions leads to the manifestation of jewelry--jewelry that turns out to belong to the deceased buried in the former cemetery.  In this sense, the term apport can be used similarly to the definition of the Spiritualist Movement--"gifts," or objects that manifest out of thin air as a sign of an entity's presence.  Although very few people have had large amounts of jewelry deposited to them out of thin air, most people HAVE had an experience that can be chalked up to being an apport.  Have you ever found coins show up in weird places, nearly everywhere you look for a period of time?  If so, you're certainly not alone!  These "pennies from Heaven" are often attributed to a loved one or other person who has passed on trying to get our attention.  The dates may be significant on the coins...or it may simply serve as a way to get us to stop and notice.  Pennies used to be the preferred apport of choice in this area, but it seems like in the past 10 years or so, pennies are quickly being replaced with dimes!  While it is true that both coins are small and light and can get caught and stuck in weird places, only to drop off later, it's always fun to think about the possibilities!

A more negative slant to apport thing is associated with poltergeist activity, and generally involves cases of homes being pelted with small rocks and pebbles.  The rock showers tend to end as quickly and mysteriously as they began...

Then there's a slightly different phenomenon that falls under the title of apport...this involves an object that goes missing, but then turns up again, either in the SAME place it was lost from, or in a different location.  These types of apports generally tend to be small, personal objects and KEYS seem to be the favorite object that goes missing!  There's a great article entitled the Disappearing Object Phenomenon (DOPler Effect) that goes more in depth into this strange phenomenon.

So that's the long definition of apport...what about asport?  Asports are generally thought of as the OPPOSITE of apport, and include items that go missing, but NEVER show back up!  Where these objects go and why they are taken is a mystery.  The best example of this would be the proverbial sock in the dryer!

Have you had your own experiences with either apports or asports?  If so, I'd love to hear them!  Send them to the comment box, or email me at theresarhps@yahoo.com  Happy Haunting!
Posted by TheresaHPIR at 2:49:00 PM