Today's Throwback Thursday vintage news article comes from the Charleston Daily Mail.  It was published on 2 September 1923 and tells an interesting tale of something strange seen along Memorial Avenue in Bluefield, WV.  West Virginia certainly is no stranger to weird creatures and with the new Fallout 76 game featuring so many of them, I'm glad to have the opportunity to share a few of the lesser known.  But, what this some sort of monster or creature...or was it a ghost?  Perhaps it was all just a practical joke.  We may never know, but please enjoy this strange little article, transcribed below and if you're looking for MORE of West Virginia's strange creatures, check out these articles on the Bluefield Gargoyle and the Creature of  Milton's Kilgore Creek!  Stay spooky and stay away from those Petting Parties! 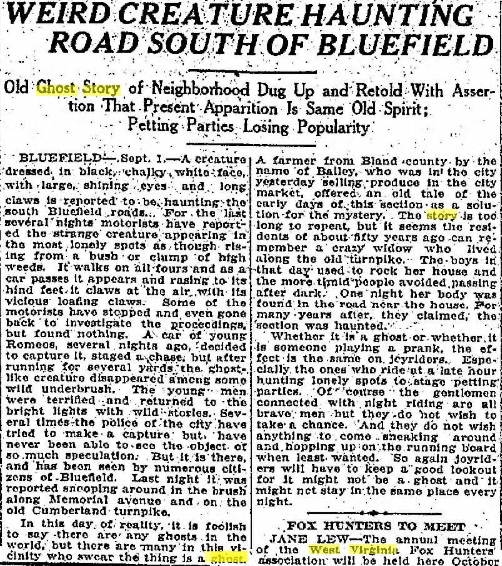 BLUEFIELD--Sept. 1--A creature dressed in black, chalky white face, with large, shining eyes and long claws is reported to be haunting the south Bluefield roads.  For the last several nights motorists have reported the strange creature appearing in the most lonely spots as though rising from a bush or clump of high weeds. It walks on all fours and as a car passes it appears and raising to its hind feet, it claws at the air with its vicious loafing claw.  Some of the motorists have stopped and even gone back to investigate the proceedings, but found nothing.  A car of young Romeos, several nights ago, decided to capture it, staged a chase, but after running for several yards the ghost-like creature disappeared among some wild underbrush.  The young men were terrified and returned to the bright lights with wild stories.  Several times the police of the city have tried to make a capture but have never been able to see the object or so much speculation.  But it is there, and has been seen by numerous citizens of Bluefield.  Last night it was reported snooping around in the brush along Memorial Avenue and on the old Cumberland Turnpike.

In this day of reality, it is foolish to say there are any ghosts in the world, but there are many in this vicinity who swear the thing is a ghost.  A farmer from Bland County (Virginia side of Bluefield) by the name of Bailey, who was in the city yesterday selling produce in the city market, offered an old tale of the early days of this section as a solution for the mystery.  The story is too long to repeat, but it seems the residents of about fifty years ago can remember a crazy widow who lived along the old turnpike.  The boys in that day used to rock her house and the more timid people avoided passing after dark. One night her body was found in the road near her house.  For many years after, they claimed the section was haunted.

Whether it is a ghost or whether it is someone playing a prank, the effect is the same on joyriders.  Especially the ones who ride at a late hour hunting lonely spots to stage petting parties.  Of course the gentlemen connected with night riding are all brave men but they do not wish to take a chance.  And they do not wish anything to come sneaking around and hopping up on the running board when least wanted.  So again joyriders will have to keep a good lookout for it might not be a ghost and it might not stay in the same place every night.