What's a Bazaare? Bazaare = Bazaar + Bizarre, and its what happens when you bring together a bunch of paranormal authors and researchers specializing in UFOlogy and cryptozoology for a FREE meet and greet event and merch sale!  The Bazaare was put on by the Flatwoods Monster Museum, and was another great opportunity to bring attention to the Flatwoods Green Monster as well as the paranormal field in general.  It was also a great way to bring paranormal enthusiasts and others to the Sutton/Flatwoods area for an up-close look at the little town that made history in 1952. 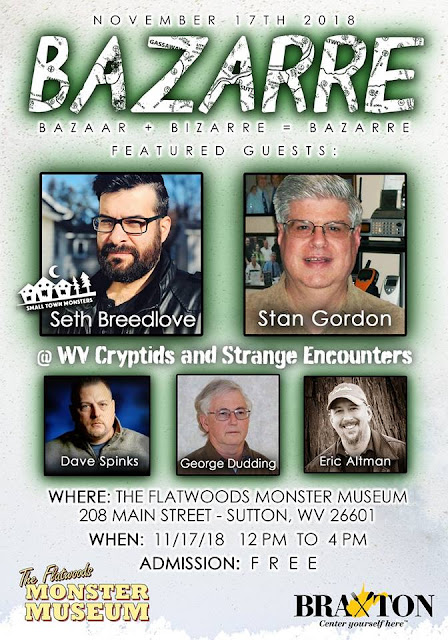 After Luke's jiu-jitsu class, we jumped into the Jeep and made the journey north to Braxton County.  The last time Aaron and I were in Braxton County, we visited the Flatwoods Monster Museum, took pictures with all 5 of the Monster Chairs, and concluded the evening with the world premier showing of Small Town Monsters' movie, The Flatwoods Monster: A Legacy of Fear.  It was a lot of fun, but we didn't have Luke with us!  We thought the Bazaare would be a great opportunity to introduce him to the legends and lore of the Flatwoods Monster without him getting bored and cranky, lol. 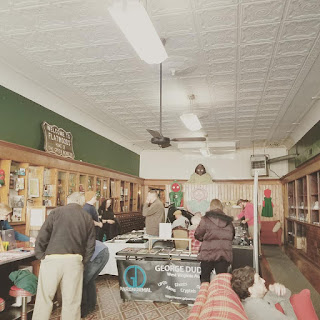 We were right!  The event ran from 12 p.m. to 4 p.m. and we arrived around 12:30 p.m. with things already in full swing.  The center floor of the museum was set up with several large tables packed with merchandise from Seth Breedlove, Stan Gordon, Dave Spinks, George Dudding, Eric Altman and Les O'Dell from WV Cryptids and Strange Encounters.  Each featured guest was available and eager to chat with---sharing their knowledge and hearing visitor stories. 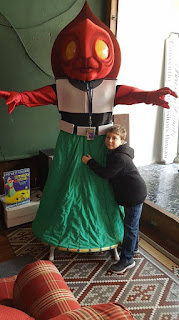 Paranormal investigator, Dave Spinks was there with his new book, West Virginia Bigfoot.  I had to pick up a signed copy for myself and have a quick talk with Dave, who is a really nice and genuine kinda guy.  George Dudding was there with his wide array of books on all things spooky in West Virginia, and Stan Gordon had some of his work available as well.  Seth Breedlove was selling DVDs of his Small Town Monsters productions, including his Flatwoods movie.  Luke, however, was more interested in his movie on the Beast of Bray Road, lol.  Funny side note:  When Luke was about 3 years old, we took him to the French Creek Wildlife Center.  We were both fascinated by the wolves---lying in the sun they just looked like a cute, happy domestic dog.  However, when they stood up and walked, there was something powerful and a little creepy about their movements.  Later on, when we asked Luke what his favorite animal was that he saw that day, he replied with, 'the werewolves.' For YEARS after that, whenever you'd ask him what his favorite animal was, he'd say it was a werewolf.
Anyway, Eric Altman, who is a Bigfoot researcher, was also in attendance with some cool merch and information. Les from WV Cryptids and Strange Encounters was there as well, and its always a pleasure to see him and talk with him about his current research.  We first met Les at the museum back in April, so it was fitting that we got to go see him again at the museum.  He even had a really awesome gift for me:  an Ouija t-shirt that he made!  Speaking of the museum, it was up and running as usual during the event and the staff was awesome as usual---very friendly, chatty, knowledgeable and helpful.  Luke had a fun time checking out the displays, and it always amazes me how interested he actually is in this stuff, asking follow-up questions and talking about what he saw for days afterwards.  We bought some really cool souvenirs, some for us and some to send to friends in Australia, including postcards, magnets, and guitar picks.  Luke was thrilled to see the pressed penny machine, as he absolutely loves those things and honestly, there were some really cool designs! 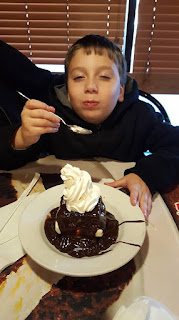 We wrapped up our visit to the museum, but we weren't done with Braxton County yet! We had planned on grabbing lunch and then starting the journey to photograph all five of the Monster Chairs. We wanted to take Luke to The Spot, the little restaurant decorated with monster memorabilia and featuring menu items named after various creatures.  Unfortunately, The Spot was closed for the season!  That was a huge disappointment, but it turned out to be a blessing in disguise.  Not only does it give us an excuse (as if we needed one!) to return in the Spring/Summer, but it led Luke to the finest dessert known to man.  We ended up having lunch at Shoney's, which was actually sort of a treat since most of the Shoney's restaurants around us have closed.  The meal was good, but Luke and Aaron decided to order the chocolate cake/sundae monstrosity you'll see in the photo.  I'm pretty sure my son now has diabetes, but it was sweet to see him so excited about a dessert and hear Aaron share his childhood memories about eating the same thing.  I'm pretty sure that made the whole trip worth it---at least to Luke!  But, we still had the chairs to conquer!

Since Aaron and I had found all five chairs back in April, we had no problems quickly locating the first four in the series.  Luke wasn't all that into it at first, but by the time we pulled up to the park for the third chair, he was excited.  Unfortunately, as we pulled into the Gassaway Dairy Queen for the last stop on our trip, we noticed a spot of dead grass, tons of No Trespassing signs, and NO CHAIR. What the hell?  We couldn't find any information online, so we drove around Gassaway a little bit to see if it had been moved.  We finally pulled into the drive-thru at Dairy Queen and asked the employee what was going on.  He told us that the property the chair sat on had been recently sold to a private buyer and the chair removed. He didn't know where it had been taken or if there were plans to reinstall it.  If you have any information, please let me know what's going on! 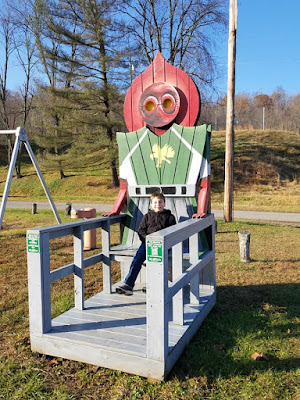 It was a disappointing way to end the day, but we had fun, nonetheless! As my son is getting older, he's getting more into West Virginia's monsters and the paranormal side of our state's history.  It's quite rewarding to have the opportunity to share stuff like this with him, and see his reaction.  And I gotta say, we are so lucky to live in an area that is embracing this spooky history more and more.  The Flatwoods Museum does such a great job in preserving and sharing information on the Flatwoods Monster.  This Bazarre was just one more way to bring awareness, have fun, and get people excited about an interesting piece of our state's history.  Please visit the links to the guests' websites/social media and show them some love...and be sure to check out the Flatwoods Monster Museum's page as well for updates on upcoming events and information on everything you've ever wanted to know about the Flatwoods/Braxton County/Green Monster!